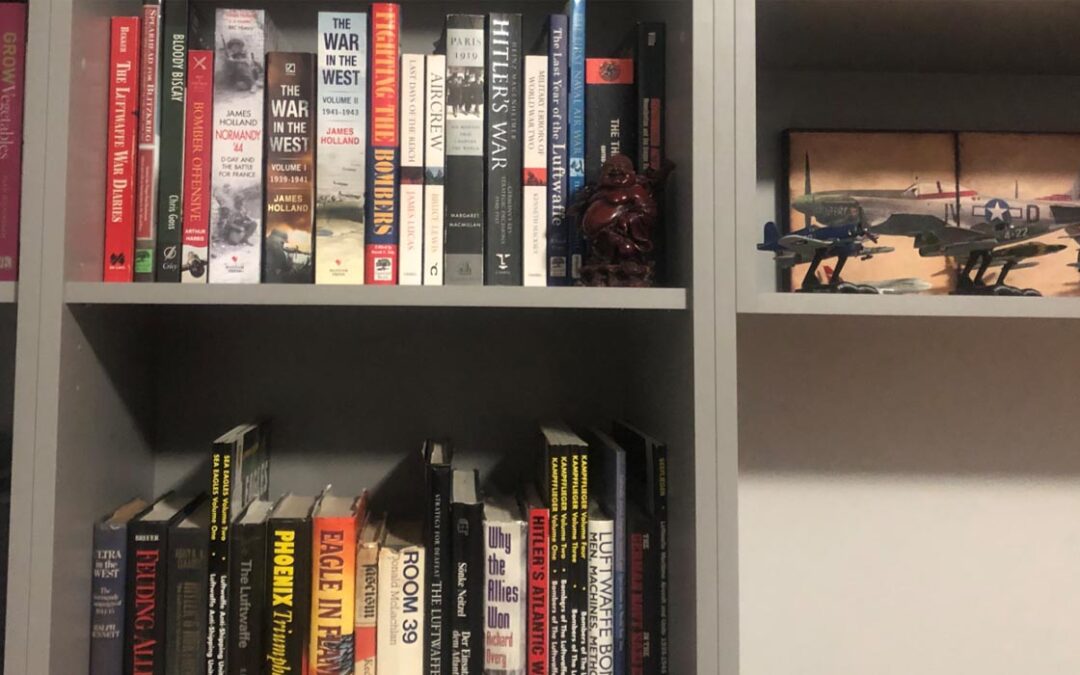 Earlier this year, Air War Publications released a blogpost about new findings into the life of ZG 1 gunner Martin Heinze. Whilst Adam, Morten and Andrew were excited about the new information, it was not lost on them that it had been a month since they had last published any form of content. Normally, the Air War Publications team aims for at least one blog post every two weeks, but this year things seem to have slipped … and we wanted to put our followers in the loop.

Recently, Morten became a first-time father, at around the same time as Adam celebrated the first birthday of his first child. While all this was going on, Andrew was hunkered down in the path of Tropical Cyclone Seroja, and started a new job. So, to say the team was a little distracted in April and May is a bit of an understatement, that we hope our readers appreciate. We have also been working very hard on three different book projects, all of which are progressing nicely.

Since it began, Air War Publications has been a hobby aviation history publishing company. Although we strive to deliver top-quality products that are backed by thorough research and attention to detail, what Morten, Andrew and Adam do here at Air War Publications is – and will remain – a hobby. That has led many people to ask why we devote so much time and energy to it all – and the answer is simple: it is a hobby that each of the three of us find enjoyable. It is something that allows us to explore our individual interests and express our particular talents in ways that, given the current publishing climate, probably would not otherwise see the light of day.

Air War Publications began in 2010, with a collaboration between Andrew and Morten on their Fw 190 in the Battle for Sicily title. From there, Air War Publications branched out into eArticles focused on mainly Luftwaffe-related research subjects, but with some Allied material thrown in for good measure. In recent years, the team has begun providing access to their research material and collaborating with other researchers and authors on various projects associated with the war in the air between 1939 and 1945. At the same time, the Air War Publications team has endeavoured to maintain a constant – almost fortnightly – stream of blogposts, covering a range of topics that we hope our readers will enjoy.

Over the last few years, the Air War Publications team have released a series of blog-posts about the books we love (Part One, Part Two, Part Three), insights into how we met, snippets about Morten and Andrew’s various research trips, along with the private musings of Adam on a family vacation in the Mediterranean. Then there are the interviews with friends and colleagues that we have been able to share, including with Don Caldwell, Larry deZeng, Doug Stankey and some other notables we are set to release later in 2021 and 2022. Of course, none of this comes together out of thin air, and a considerable amount of time is spent putting it all together. But for Andrew, Morten and Adam, this is all part of the fun. And sometimes – just sometimes – a little bit of weirdness pops up that gives one or all of them a little chuckle, or an occasion to raise an eyebrow. But the most rewarding of all is the correspondence with veterans and families of veterans, or more importantly, the random friendships that develop from such conversations – like that which has arisen between a desert pilot’s daughter and Andrew and Adam, thanks to their research into a reluctant airmen, Günter Schulze-Quentell. Balancing all this, the Air War Publications team often retreat from the shared Skype calls, or editing and writing duties, to touch base with the world outside the Luftwaffe.

When people ask Andrew, Morten or Adam about Air War Publications, they are always amazed at just how much joy we get from it. None of the three ever intended becoming millionaires from the venture – it was just a shared source of fun. We love the weird quirks, facts, stories and pictures that crop up in the course of our respective research. Likewise, we love the interactions we have with veterans, and the interaction that continues with their families and other researchers. Of course, it is not always sunshine and roses: there are times when frustration mounts. Whether that be unpleasant interactions with other researchers or families of veterans unhappy with the facts of history; an inability to find the whole history; or real life getting in the way. But that is part of the deal for anyone passionate about a hobby. The reason the team is still able to do what they do is because, through careful management, hard work and a good pinch of luck, Morten, Adam and Andrew have been able to achieve a good work/life/hobby balance that is so important, not just to the Air War Publications team, but to everyone. But, more importantly, Air War Publications is still able to do what it does because of its readership. And for that, Andrew, Morten and Adam are really grateful.

So why the silence? Well, Andrew is hard at work on his Courland project, which is well on the way to completion (several chapters have already gone to Morten and Adam for editing). Meanwhile, Morten and Adam are busy working with two different authors on some very interesting book projects – Doug Norrie’s No. 450 Squadron RAAF book, and another book that we hope to announce later this year. Although we can’t reveal anything yet about the second book, let us just say that both of these projects have the AWP team very excited, and more through providence than good planning, they connect to the team’s various research projects in more ways than one!

Air War Publications want to thank every one of our supporters who have helped us, in whatever small way – from a like on Facebook, through to sharing documents, writing reviews, or submitting pieces for publication. We could not keep this little hobby going without you. Here’s looking forward to another ten more years…. and some more publishing announcements later in the year!