by Andrew Arthy | Nov 14, 2019 | A Little Bit of Everything, Books, Publications, Research 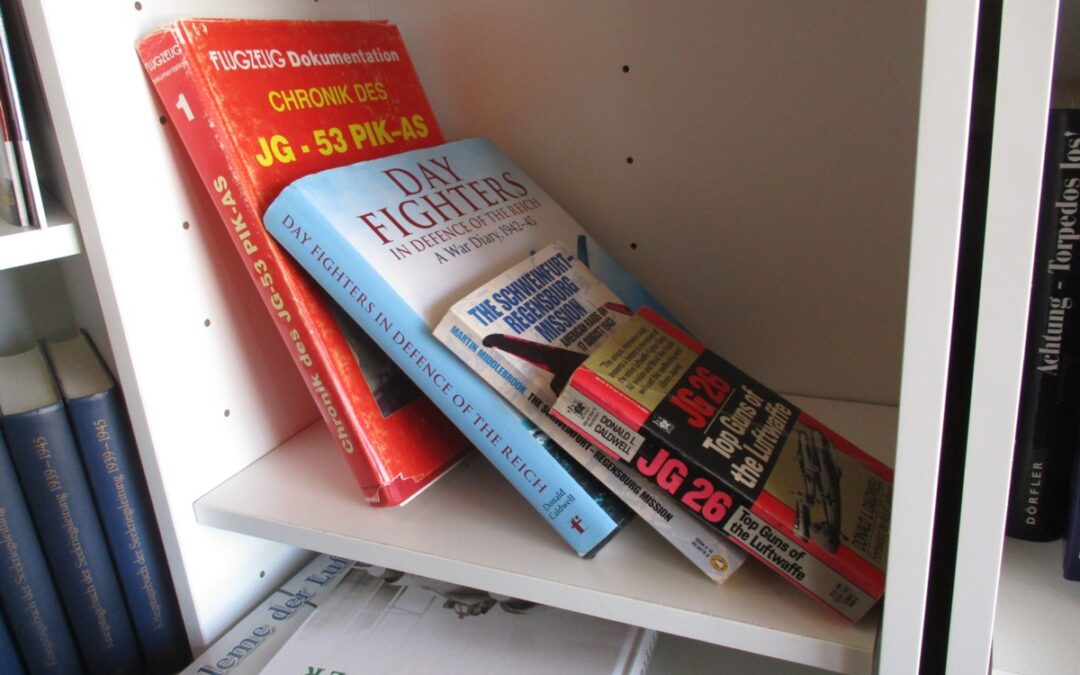 Over the years there have been many aviation history books that have inspired the Air War Publications team. In a lot of ways, those authors have helped influence and shape the way we research and write. In a series of three blog posts, Andrew, Adam and Morten thought they would share a few titles that inspired them, and explain what it is about those stories that they like so much. Andrew is first up, and his top five are as follows:

Shores, Ring & Hess – Fighters Over Tunisia
“I think this is the perfect example of how to write a day-by-day war diary-style history of an aerial campaign. I borrowed it in high school from the local library, and it was my first big inspiration when it comes to aviation history.

Although they were writing in the 1970s, Shores and his team managed to tell the entire story of fighter combats in the Tunisian campaign from the perspectives of all air forces involved. It is primarily a reference book, but it can also be read as a story, and that is one of its many good points. The use of first-hand accounts is really well done, with not too many used, but enough to provide some colour and give the reader a feel for what it was like to fly and fight in Tunisia. This book was definitely an inspiration to Morten and I when we wrote Focke-Wulf Fw 190 in North Africa, and with Focke-Wulf Fw 190 in the Battle for Sicily, we tried to take this ‘war diary but a story’ style as far as we could.

Although the book has since been updated, as Volume 3 of the Mediterranean Air War series by Christopher Shores and Giovanni Massimello with Russell Guest, Frank Olynyk and Winfried Bock, I still love the original. It can be found in the usual online locations for a reasonable price.”

Middlebrook – The Schweinfurt-Regensburg Mission
“This is a book I only read for the first time this year, but it has been a true ‘page-turner’. Middlebrook has the very rare ability to take you from the overall story at Air Force level down into the cockpit or gunner’s position. He effortlessly weaves in compelling first-hand accounts, many of which he gathered himself. If you are planning to write a story about a single day of aerial engagements, this really is the perfect example of how to do it.”

Caldwell – Top Guns
“Luftwaffe history books printed as mass paperbacks are very much a rarity, particularly in the last 30 years. Don Caldwell’s wonderful unit history of Jagdgeschwader 26 is an exception to that rule, and there are many good reasons for that.

Caldwell tells the story of Jagdgeschwader 26 from formation to disbandment, and it is quite a story. The unit was one of the most famous in the Luftwaffe, and Caldwell uses a great variety of sources to describe its history. He never gets bogged down in ‘they shot down eight aircraft on that mission, and five on the next mission’. He does outline the operational history, but he considers all the other aspects of a Luftwaffe fighter unit – leadership, personalities, supplies, aircraft, tactics, the decisions amongst Allied commanders that affected Jagdgeschwader 26, and much more besides. There are heroes and villains, and some wonderful first-hand accounts obtained from veterans.

I hope to write the Air War Courland book in the same style as Caldwell, as an engaging read full of stories and characters. Air force units were homes to hundreds of men, all of whom had different personalities, motives, abilities, and so on, and Caldwell does such a great job of demonstrating this in Top Guns.

You can pick this up very cheaply online, and if you haven’t read it before, it is highly recommended.”

Caldwell – Day Fighters in Defence of the Reich: A War Diary, 1942-45
“Twenty years later, and Caldwell was at it again. This time, it is a very different type of book. The purpose of Day Fighters in Defence of the Reich is to detail all the Eighth and Fifteenth Air Force raids flown during the war, and the Luftwaffe reactions to the raids. It is written in a day-by-day format, with each day having a summary of Allied and Luftwaffe air operations (sorties, targets, claims, losses, a description of the day’s events, and then a table listing Luftwaffe units involved in operations). Numerous mission maps are also included. It sounds like a reasonably boring concept, but Caldwell has managed to turn what could be a very dull, dry reference book into something that is surprisingly readable.

Yes, there are lots of data tables listing sortie numbers, claims, losses, take-off and landing times and the like, but the daily mission descriptions Caldwell writes, and the monthly introductions in particular, turn this into a book you can read as a story. The regular inclusion of first-hand accounts from pilots involved in different missions really helps the atmosphere of the book as well – you get the bird’s-eye view, and then the cockpit view. He introduces characters, considers the overall war situation, looks at both sides of the story, and the photo selection is also very good.”

Prien – Jagdgeschwader 53
“Jochen Prien and his team have produced dozens of excellent books over the years, but for me, Jagdgeschwader 53 remains the best (with an honourable mention to Jagdgeschwader 77). This is because it is such a great story, that has been carefully researched. Prien doesn’t just look at how many aerial victories ‘his’ pilots claimed, he looks at the complete story. You get a feel for what it was like to serve in Jagdgeschwader 53, and all the issues that affected the men in the unit. The latter aspect is something Morten and I tried to incorporate into our Focke-Wulf Fw 190 in the Battle for Sicily book – just like JG 53, SKG 10 and Sch.G. 2 were not operating in their own little realm – bigger issues like Allied bombing raids and supply problems affected how they operated.”

Adam’s selections will feature in the next blog post, and he commented on the above list: “Definitely! You can’t make a list like this without honourable mentions, and Ommert and Mombeek have to be up there in any such bibliography. I remember driving a five-hour round trip to a speciality book store some years ago, just to purchase titles by many of the authors on this list!”. You can read about Adam’s favourite books here: Aviation History Books We Love – Part Two