by Andrew Arthy | Aug 3, 2020 | A Little Bit of Everything, Books, Publications, Research 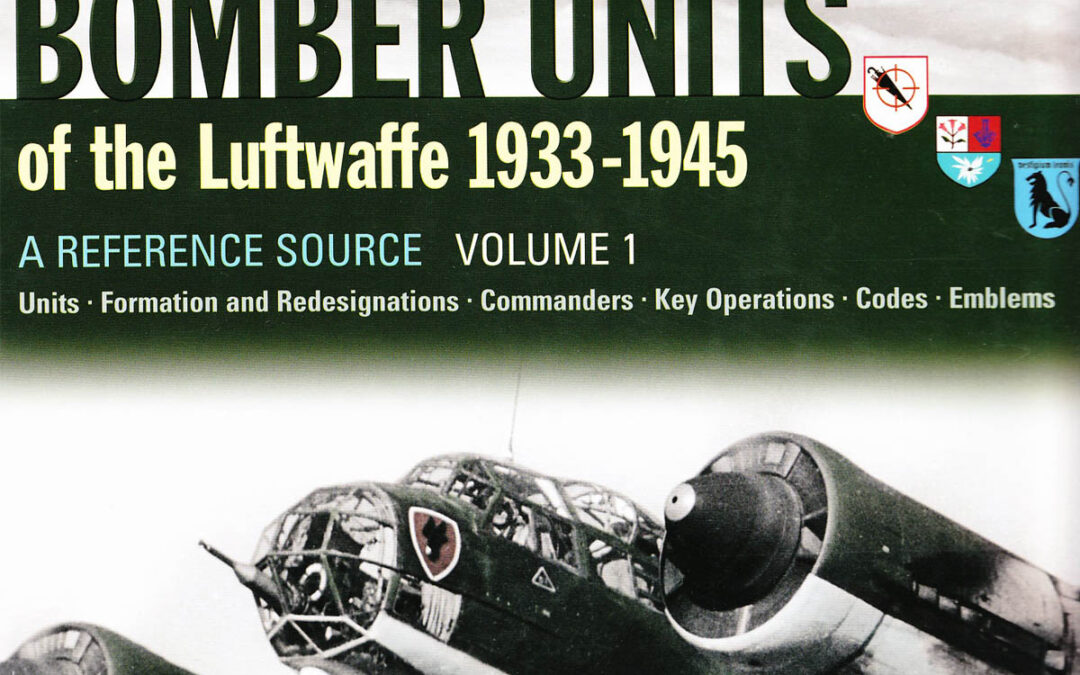 1. When and how did you become interested in researching the Luftwaffe in the Second World War?
I was about ten years old when I encountered the February 1959 issue of RAF Flying Review, which featured an eight-page pull-out of profiles of German aircraft of the Second World War. The variety and strangeness of those planes was just fascinating. Later in my teens, I encountered magazines with articles about aircraft and campaigns, and with making scale models of these, my interest began to jell. Then in October 1972 I received copies of Warplanes of the Third Reich by William Green, and Luftwaffe Camouflage and Markings by Karl Ries. The hook was now thoroughly set! Soon after, I bought more and more books on the subject. By 1988 I was buying up to 170 books a year.

I started, in 1971, to use 3 x 5 index cards to develop files concerning units.  These got bulky and I converted to using small binders which were much more portable. I used this system until 1993, then converted to computer files, totalling about 2,200 air units.

2. What was the first Luftwaffe subject you really looked into?
My first interest was in the aircraft (I am a technical person), but this led to camouflage and markings which led to units, which led to operations and both led to personalities. Like so many things Luftwaffe, it just never ends.

3. What was the first book you wrote, and when was it published?
Our ‘first born’ was Bomber Units of the Luftwaffe Volume 1. Actually composing the drafts started in earnest during the autumn of 1999, with the publication of the book in 2007.  Drafts for the second book, Dive-Bomber and Ground-Attack Units of the Luftwaffe, started in 2002. We wanted to have something presentable before taking them to a publisher. Both Volumes One and Two for each book were written at the same time. Dive-Bomber and Ground-Attack Units of the Luftwaffe Volume One was published in 2009 but Volume Two was delayed three-and-a-half years due to the financial troubles of Ian Allan, and was finally released in 2013. Several other unit volumes have been in development since 2003.

4. What is your current primary research focus?
These days I am almost completely concerned with the gathering and collation of career data for Luftwaffe officers of commissioned rank. Larry and I had discussed the feasibility of such a project back in 1990, soon after we first met. We concluded that it was impossible to achieve a complete set of such data, but Larry collected what information that he could find and in 2005 he invited me to help out. At that point there were ‘only’ 17.500 officers in the Summaries. In 2009 or 2010 he appointed me editor so that he could concentrate on his multi-volume ‘Airfields of the Luftwaffe’. As the 2020 edition approaches, the total is about 80.000 and it never stops growing!

5. What was the hook, or the moment that made you realise you wanted to carry on down the path of research?
I don’t know if you could describe rummaging through books as ‘research’, but between encountering Warplanes of the Third Reich and the Karl Ries books, I was hooked on the unit histories.

6. How did you find yourself collaborating with Larry deZeng?
In 1989, I had ordered copies of the Norbert Kannapin FPN (postal codes of the Wehrmacht) volumes from dealer/publisher J.J. Fedorowicz of Winnipeg, which led to correspondence with him and with his translator, Dave Brown of Nova Scotia, who connected me with Dr. James Kitchens of Alabama, who in turn connected me with Larry deZeng, who sent me an introductory letter in April 1990, which I still have.

7. How has research changed over the years, do you think?
The Internet and computerization have certainly sped up communications, making it far easier to make the multifarious connections with sources and publishers. On the other hand, while web-pages have improved greatly, the variability of research has polluted them with unreliability. As long as we treat all sources as suspect we can try to avoid being misled. Caveat Emptor.

8. What do you think the future of research is in terms of the Luftwaffe?
I expect that it will be more of the same, the preoccupation with fly-boys, and fighters in particular. While I view that as limited and hackneyed, it is all just part of the picture, so my position is: ‘each to their own’.

9. What’s an important aspect of the Luftwaffe or the air war in general that you think hasn’t been looked at enough, or at all?
Ground units have been horribly neglected. Larry has files on about 14.000 of them. Apart from the invaluable Michael Holm site, there is little to nothing published on the subject. In view of the fact that the vast majority of the personnel were assigned to this category, this would appear to be a neglected area.

Speaking of personnel and neglected areas, the subject of career histories of Non-Commissioned Officers (NCOs) is an area that could use development. We have deliberately limited ourselves to commissioned officer careers, not to slight the NCOs, but to limit the scale of the task (to about 130,000 individuals!). The number of NCOs in the Luftwaffe would be about half–a-million! I might suggest that any Career Summaries for NCOs be limited to those of the Fliegertruppe, which should not exceed 150.000 individuals.

11. How do you think we can encourage people to get into research – especially in an age of Wikipedia and the History Channel – to avoid repeating generalities and half-truths and in some instances, falsities?
We cannot do much about media nonsense but to take that interest generated by all that and direct it toward better reference matter, initially to better websites, then to better books and then to archival sources. That’s why Larry and I are so careful about citing sources.

10. If you had any advice for people getting into this field, what would it be?
Once sufficiently ‘hooked’ by enthusiast books and web sites, one should concentrate on collecting better quality books. Yes, they are more expensive but the quality is just so much better. After that, one thing will lead to another.

12. What’s been the biggest frustration in research that you’ve faced?
The biggest frustration, in personal terms, has been my declining health (hemiplegia). The next biggest frustration is that while the Luftwaffe Personalamt (LPA) files are relatively intact, effectively we have no access to these due to German government rules. While ostensibly this is due to privacy considerations, this sounds like bunk to us. On the other hand, if we had had untrammelled access to this source, we would not live long enough to completely digest it!

13. What’s one ‘wow’ moment that you’ve had in researching the Luftwaffe?
Almost ten years ago, a fellow who shall go unnamed started sending us detailed personnel files for about 500 officers. These, among many others, had been gathered by this fellow back in the 1960s for some research project. These were stunning in detail. Unfortunately, he had lost at least 90 per cent of his files in the meantime. Even more unfortunately, he apparently died before sending us the remainder of what he could find.

Similarly, we had been alerted to post-war POW interrogation files recently found at Duxford about seven years ago. Thanks to the combined efforts of about six or seven people, I received images of all these documents. These were a gold mine!

14. Is there a project you’d love to look into, but just don’t have the time?
I had been scanning officer portrait photos. While I have about 5.000 so far, I know that there are at least as many again not yet scanned out of my approximately 1.900 books.