Close Shave for a Junkers 188 Crew 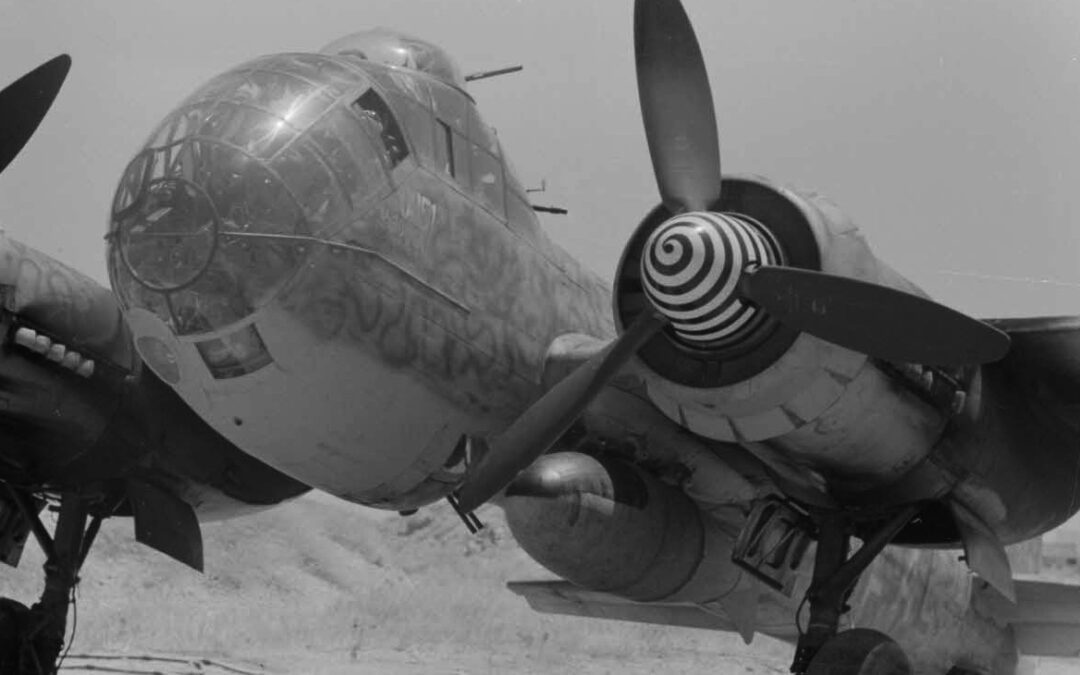 The Junkers 188 was a very capable reconnaissance aircraft, and it was vital to the Wehrmacht on the Eastern Front in the final years of the Second World War. Ju 188 crews ranged far and wide over Soviet territory, providing vital intelligence on enemy troop and railway movements, airfield and harbour occupation, and much more besides. Most missions were uneventful, because the Soviets lacked the kind of advanced, integrated air defence system possessed by the British and Americans in the West. However, things did not always go according to plan for the Germans, and one such case occurred on 8 April 1944 – Easter Saturday – when a crew from long-range reconnaissance unit 4.(F)/Aufklärungsgruppe 14 fought off Soviet fighters and had their Ju 188 targeted by ferocious anti-aircraft fire, but still managed to limp home.

4.(F)/14 started the war with the Dornier 17, and then operated the much faster and less vulnerable Messerschmitt Bf 110 during the Battle of Britain in 1940. Following conversion to the Junkers 88, the Staffel flew missions over the central sector of the Eastern Front after the Germans invaded the Soviet Union on 22 June 1941. Heavily involved in the battle for Moscow and the subsequent Soviet counteroffensive in the winter of 1941/1942, the Staffel converted to the Ju 188 in January 1944, taking on strength twelve brand-new Ju 188 F-1s.

In early April 1944, the Staffel was based at Baranowitsche, to the south-west of Minsk in Belarus. By this stage of the war, the Soviets were preparing for their decisive summer offensives, and Luftwaffe reconnaissance units had the important task of monitoring the build-up of Red Army forces all along the Eastern Front.

On 8 April, a Ju 188 marked ‘5F + GM’ took off from Baranowitsche to conduct a routine reconnaissance flight, but the mission would turn out to be anything but mundane. Weather conditions were not particularly favourable for flying on the eighth, but Luftwaffe reconnaissance airmen were expected to operate in almost all conditions. At the controls of the aircraft was Edgar Lahrssen, who had flown 57 missions in the Ju 88, beginning on 1 May 1943, but was making his debut in the Ju 188. Lahrssen had commenced his flying training in Austria in 1940, and was very thoroughly prepared for combat, undertaking 783 training flights before joining 4.(F)/14.

The vital observer position in the Ju 188 was occupied by none other than the Staffelkapitän of 4.(F)/14, Major Karl-Heinrich Fischer, an experienced former bomber pilot. The rest of the crew was radio operator Feldwebel Helmut Schalwat and gunner Unteroffizier ‘Mops’ Löffler.

The four men took off at 07:05 and headed for the front via Vitebsk, a fortress city being threatened with encirclement by the Red Army. Heavy anti-aircraft fire was encountered at Liosno, near the Belarus/Russia border. They then flew north to the vital railway junction town of Welikije Luki, which was a regular target for German nocturnal bombers in 1944. More strong ground fire was directed towards the Ju 188 in that area, but things were about to get much worse.

The long-range reconnaissance aircraft conducted their missions solo, and with no fighter escort, they relied on speed, careful observation, skilful flying, and more than a slice of good luck, to avoid enemy fighters.

On this occasion, luck would not be with Major Fischer and his men, because they were intercepted near Welikije Luki by Soviet fighters, identified by the Germans as two LaGG-5s and two MiG-3s. The Soviet pilots made determined attacks for fifteen minutes, including two attempts to ram, and they hit Lahrssen’s aircraft 30 times. Despite their efforts, the Luftwaffe aircraft was eventually able to escape towards base, but the next challenge was to make it home! Due to the damage sustained, the right engine was put out of action, and the elevator had also been struck, and subsequently jammed.

The Soviet fighters were actually a pair of Yak-7b aircraft from 441.IAP (441st Fighter Regiment) of 106.IAD (106th Fighter Division), part of the PVO (Air Defence Forces), who reported combat with a ‘Ju 88’. The regiment had defended Moscow in 1941, and had been given Hawker Hurricane Mk. IIDs and Mk. IVs to operate during the winter of 1943/1944, alongside its LaGG-3s and some La-5s. The regiment commander made numerous requests that his unit be allocated more capable interceptors in place of the Hurricanes. By the spring of 1944 his wish had been granted, and 441.IAP had received more modern aircraft types. The unit protected special mail trains in the early months of 1944, and was commended for its efforts in this task, particularly along the stretch of railway line between Welikije Luki and Nelidovo.

During the battle on 8 April 1944, ml.Lt Victor Ignatovich Rylkov’s Yak-7b was hit by twelve machine-gun bullets fired by Lahrssen’s crew, but he managed to make it safely back to base. The other 441.IAP pilot involved was Vasily Andreevich Mikhailik.

The 441.IAP was hardly an elite unit – Mikhailik undertook just 40 sorties between 27 February 1943 and war’s end, while Rylkov flew a mere 24 sorties from 1 August 1943 to 31 July 1944. For both Mikhailik and Rylkov, the engagement on 8 April 1944 would be their only taste of combat. Undoubtedly, their lack of experience contributed to the survival of the Ju 188 crew on this occasion.

Thanks to Lahrssen’s skilful flying, the Ju 188 made it back to Baranowitsche, and was able to make a wheels-down landing, but ‘5F + GM’ was more a colander than an aircraft by this stage, with holes in the wing, fuselage, and tail. Photographs show the extensive damage, and the crew was exceptionally lucky to make it back to friendly territory, let alone to their own airfield, which was some 460 kilometres from Welikije Luki.

Major Oskar Otolski, a Ritterkreuz winner and the Kommandeur of 4.(F)/14’s commanding headquarters, Fernaufklärungsgruppe 2, acknowledged and rewarded the crew’s efforts, with the following message sent later that day:

“I would like to express my special appreciation to the crew of Major Fischer, and in particular to the pilot, Feldwebel Lahrssen, for the excellent flying performance, including a landing with one engine and a jammed elevator.
The crew will be gifted the following as a recognition of their efforts: four bottles of sparkling wine, four half-litre bottles of cognac, and 80 cigarettes.“

For airmen on the Eastern Front, this was a reward to be savoured! As could be expected, the crew celebrated their survival and good fortune that evening, as Edgar Lahrssen later wrote:

“Fischer, Schalwat, ‘Mops’ and myself celebrated in Fischer’s room far into the night. The bottles given by Otolski were not enough. We looked back at what we had experienced. Each man had seen and experienced it differently in their respective positions on the aircraft.
Easter Sunday was wonderful – a new life!“

Sadly for the Staffel, the well-liked Major Fischer would soon leave for a new command, only to be replaced by a dedicated Nazi, who instigated drill and political education for the unit’s personnel.

Edgar Lahrssen later described 8 April 1944 as his “longest flight and longest day“, even though he would undertake another 28 reconnaissance sorties in the Ju 188 before the end of the war. He survived the conflict, and passed away in 1990.

4.(F)/14 would continue to operate the Ju 188 over the Heeresgruppe Mitte sector until almost the end of the war, against increasing Soviet ground and air opposition. On the other side of the lines, 441.IAP would continue to serve in defensive roles until Germany was defeated, and then well into the post-war years, finally being disbanded in Bryansk in May 1961.