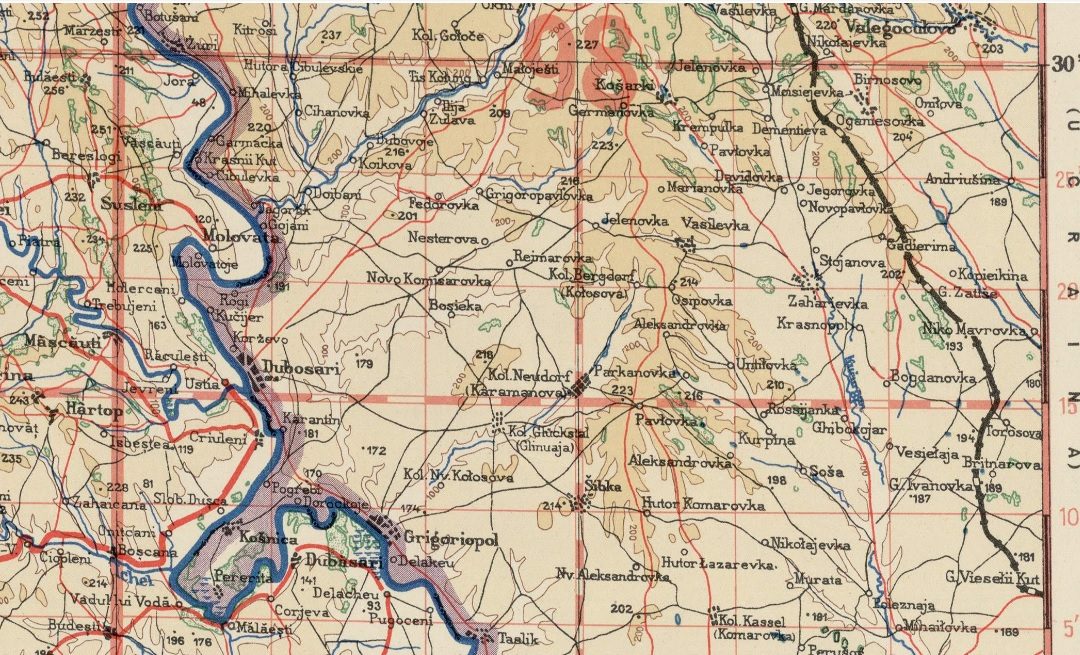 Introduction
The fighting on the Crimean peninsula concluded on 12 May 1944, but the Luftwaffe still had plenty to deal with on the southern sector of the Eastern Front. The Soviets had advanced into Romania in March and April, and opposing the advance was the powerful I. Fliegerkorps (headquarters at Focsani). On 20 May, that Luftwaffe command focussed its operations on Soviet forces in the Grigoriopol area, in modern Moldova. The town had been liberated by the Soviets on 12 April 1944, and they established a bridgehead across the Dniestr River south of the town, which would allow an advance to Chisinau and beyond.

A section of a Luftwaffe Fliegerkarte showing the Grigoriopol area (Pl.Qu. 987) is included below (click for larger version): 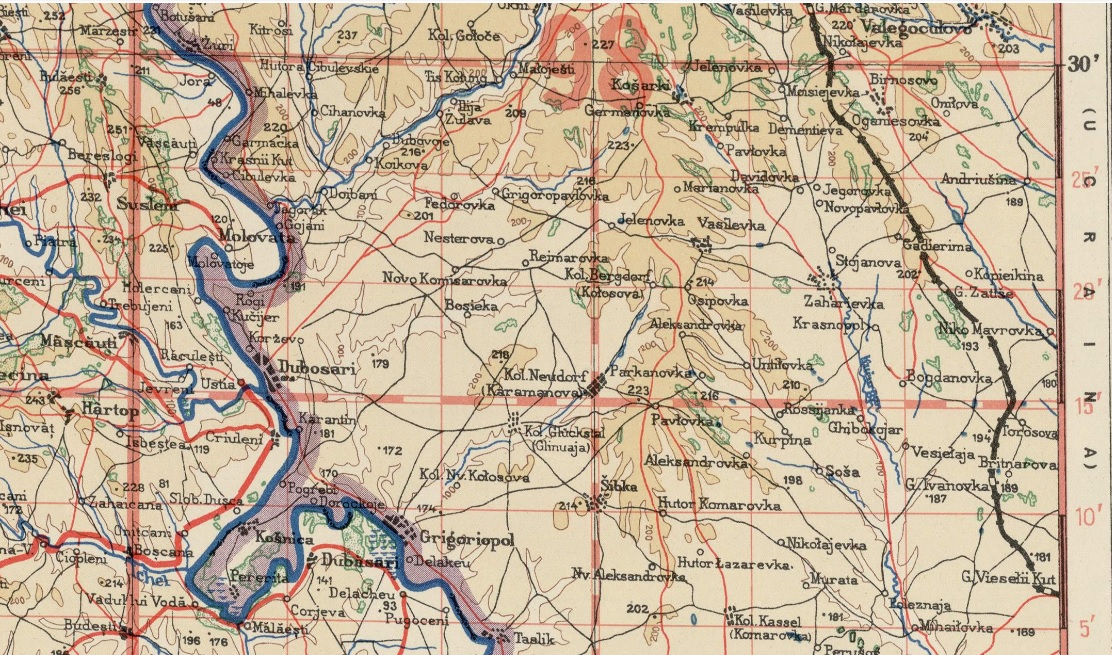 As can be seen, I. Fliegerkorps was home to many veteran units full of highly experienced personnel. Men like Rudel, Lipfert, Hartmann, Batz, Korol, Buchner, Barkhorn, and Stahl were all concentrated on a small sector of the front. This provided the Germans with a very potent air force, and when the weather allowed, air power was vital to the Heer in Rumania in May 1944 (and even more so in June, but that’s another story).

Here’s a unit-by-unit description of the day’s I. Fliegerkorps activities:

I./JG 52
At least five missions were flown by the I. Gruppe of JG 52, with the first of these being an uneventful sweep from Leipzig between 06:42 and 08:00. The unit’s first aerial victory claim of the day came at 09:25 (presumably during a joint fighter sweep with IV./JG 54) right over the Dniestr bend west of Grigoriopol. Around midday a mission was flown that was timed to reach the objective at the same time as the Stukas of III./SG 2. During this operation Uffz. Alois Siebel of 3./JG 52 claimed a Boston shot down. 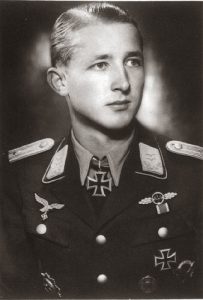 Fighter ace Walter Wolfrum of 1./JG 52, responsible for several victories on 20 May 1944. He was awarded the Ritterkreuz two months later.

In the early afternoon another sweep was flown, and this time the Gruppe clashed with many Yak-9s and LaGG-5s. Lt. Walter Wolfrum of the 1. Staffel claimed three of the Yaks shot down, his 75th through 77th aerial victories, and another pilot claimed one Yak.

Lt. Wolfrum was to taste more success on a sweep from 16:35 to 17:42 (again seemingly timed to be over the target area at the same time as Hans-Ulrich Rudel’s Stukas). Yak-9s and LaGG-5s were also met on this occasion, and the young German ace (three days short of his 21st birthday) claimed destruction of a LaGG-5 and two Yak-9s. An Il-2 was also claimed, by Fw. Nordmann of 1./JG 52.

The unit’s results for the day: ten aerial victory claims, with none of its Bf 109 G-6s damaged or destroyed.

III./JG 52
Another German Gruppe filled with experienced and successful pilots was in action at Grigoriopol on 20 May 1944: III./JG 52. The unit of Erich Hartmann and Wilhelm Batz flew operations to the bridgehead on at least four occasions, and its first aerial victories came soon after midday, with Uffz. Wester and Lt. Hartmann of the 9. Staffel both claiming LaGGs shot down.

Hptm. Wilhelm Batz, the III./JG 52 Kommandeur, enjoyed success at 13:20 and 13:34, accounting for a pair of LaGGs over the bridgehead area. Late-afternoon saw Uffz. Eberhard von Treuberg of 7./JG 52 report the destruction of a LaGG-5 in Pl.Qu. 98743. Finally, in the evening, Hptm. Batz and Lt. Hartmann downed three LaGGs between them.

III./JG 52’s tally for the day was nine aerial victories, with none of its Bf 109 G-6s damaged or destroyed.

IV./JG 54
In 1944 the IV. Gruppe of JG 54 saw service almost everywhere, starting the year on the northern sector of the Eastern Front, then to the central and southern sectors, back to Germany, rushed to the Eastern Front in the wake of the Soviet summer offensive in late-June, and then back to the Western Front again in September 1944. 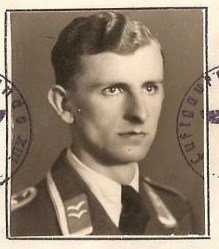 Erwin Leykauf, one of the IV./JG 54 pilots active on 20 May 1944. Leykauf was a real combat veteran, who had claimed his first aerial victory in May 1940. He would survive the war, victor over 33 enemy aircraft.

The unit was back to the day’s hotspot soon after midday, and Uffz. Julius Händel of 10./JG 54 was able to claim the first aerial victory of his career, a Yak-9. A sweep flown from 13:30 to 14:45 resulted in contact with La-5s, LaGG-3s, and Yak-9s, and Lt. Karl von Ohlen from the 11. Staffel downed one of the latter. A few hours later, the Austrian Staffelkapitän of 10./JG 54, Oblt. Sigurd Haala, tangled with La-5s over the bridgehead at an altitude of 4,500 metres, and claimed one of his opponents shot down at 18:08. The final IV./JG 54 victory claim for the day, and indeed for I. Fliegerkorps, fell to the Kommandeur, Hptm. Gerhard Koall. The Il-2 was his 38th aerial victory of the war.

In total, the Gruppe reported four aerial victories and reported none of its Bf 109s lost or damaged.

I./SG 2
This Gruppe was very busy with its Ju 87s, flying at least seven missions from Husi during the course of the day. Pilot Lt. Eginhard Weissmann, who after the war received a Ph.D. in experimental physics and wrote books on the subject, recorded his mission numbers 570 to 576 on 20 May 1944, targeting artillery and Soviet positions to the north and north-west of Grigoriopol.

The only recorded German aircraft loss for the day was suffered by I./SG 2, a Ju 87 attacked and shot down by Soviet fighters.

III./SG 2
Hans-Ulrich Rudel’s men flew at least five missions to the Grigoriopol area on this day. One of them later wrote about his unit’s operations in mid-May 1944:

“The precarious situation on the Dniester meant that our III. Gruppe was fully committed. When the weather permitted, six to seven missions were often flown in a day. Major Rudel knew about the plight of our ground forces. He could not rest, and also undertook bad weather sorties.“

Rudel later wrote: “Koschnitz, Grigoriopol and the bridgehead at Butor are names we shall long remember“. He had particular reason to remember 20 May 1944, because his rear gunner claimed the destruction of a Soviet fighter during one of the day’s missions. 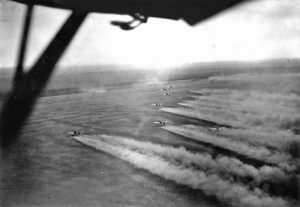 Ju 87s taking off from an Eastern Front airfield in May 1944.

It was in the evening, at 16:55, that Rudel’s gunner, Stabsarzt Ernst Gadermann, made his aerial victory claim. This was for an Airacobra pursuing the III./SG 2 commander’s Ju 87 at an altitude of just ten to twenty metres. In his memoirs Rudel describes Gadermann downing a LaGG-5 at low altitude on an afternoon mission over “the loop of the Dniestr between Koschnitza and Grigoriopol“, which is possibly this incident, with the aircraft type misremembered by Rudel.

III./SG 2’s tally for the day was one aerial victory, at least two anti-tank guns destroyed, and no aircraft lost or damaged.

I./SG 10
The Fw 190-equipped I./SG 10 flew at least four missions on this day, although one of them was an unsuccessful scramble in the morning. Pererita was the target for a bombing mission between 14:40 and 15:45, and the unit’s last known operation came between 18:15 and 19:15. I./SG 10 recorded no aircraft lost or damaged on this day.

Away from combat, life was quite pleasant for the men of II./SG 10, as unit veteran Leopold Wenger wrote in a letter home on 19 May 1944:

“It’s gotten really warm here, a bit early. So we changed our winter clothing into our summer suits of blue linen, almost like clothing designed for the tropics. It’s also gotten quite comfortable in our village. The blossoms on the trees have already come out and now everything is beautifully green. Our house has a small verandah which is entirely glassed in. We’ve decked this area out so it’s quite relaxing and pleasant now, and it’s now our relaxation area.“

Not Involved
There were several units under I. Fliegerkorps which did not participate, for various reasons. II./JG 52, the 15. Croation Staffel of JG 52, and II./SG 2 were all resting and recovering after their exertions in the Crimean campaign. A II./SG 2 pilot described it thus: “… our Gruppe had a rest from operations while we were re-supplied with material and a few new pilots came to the Staffeln.” These units would return to action in the very near future.

III./SG 10 reported two aircraft lost and two damaged on non-combat flights on 20 May 1944, so it seems likely that it was transferring between airfields.

The Other Side
Noted Russian aviation historian Nikita Yegorov wrote on the Luftwaffe and Allied Air Forces Discussion Forum that Soviet losses in this region on 20 May 1944 were sixteen fighters to all causes (against 21 aerial victory claims for fighters by Luftwaffe pilots and airmen). Nikita noted that Soviet claims were nine Ju 87s, seventeen Bf 109s and eighteen Fw 190s destroyed.

Conclusion
Thus ended a very busy and successful 24 hours for the Luftwaffe in the Grigoriopol area. The German ground offensive continued there over the next couple of days, as the men of XVII. Armeekorps gradually destroyed the pocket of Soviet troops. The weather was not always agreeable, but I. Fliegerkorps provided as many effective sorties as it could to support the army.

Sources
Primary sources used for the above include logbooks, victory claims via Russell Guest, Summarische Verluste records via Andreas Brekken, Leopold Wenger’s letters, and ULTRA. Frustratingly, I found most of the I. Fliegerkorps day reports for May and June 1944, but not that of 20 May.

Secondary sources include the memoirs of SG 2 pilots Hans-Ulrich Rudel and Emil Oechsler, John Erickson’s The Road to Berlin for army information, the excellent Luftwaffe Officer Career Summaries by Larry deZeng & Doug Stankey, and the Hermann Buchner and Helmut Lipfert books for II./SG 2 and II./JG 52 respectively. Excellent background reading can be found at Jörg’s Wiedemann’s site. It is highly recommended.