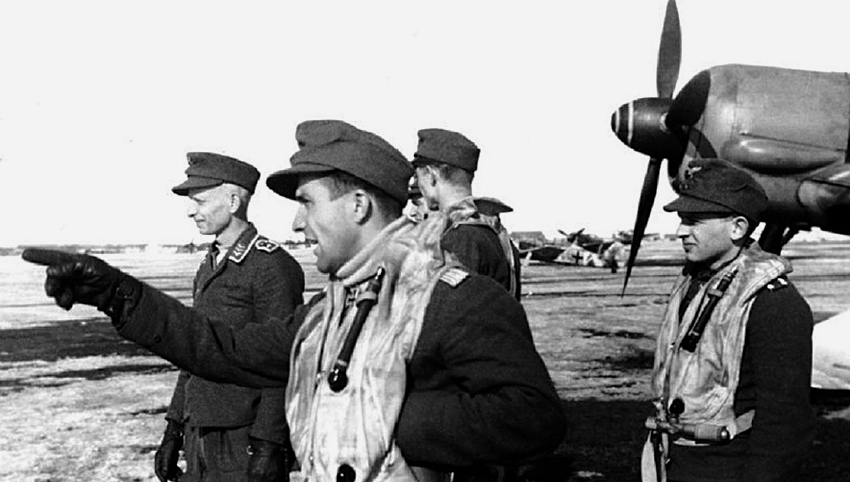 There are times in a researcher’s life when the sources match up neatly, and Otto Kittel’s deadly attack on a formation of 97 Pe-2 bombers from the Soviet unit 1. Gvardeyskiy Bombardirovochnyy Aviatsionnyy Korpus (1.GBAK, or 1st Guards Bomber Aviation Corps) on the afternoon of 24 July 1944 is one of those occasions. Kittel, a member of the 3. Staffel of Jagdgeschwader 54, was a highly experienced fighter pilot whose aerial victory tally was rapidly approaching 200, and he was a deadly opponent for Soviet airmen over the Baltic States in the summer of 1944.

The troops of the Soviet 1st Baltic Front had begun an offensive on 20 July, and four days later they continued to push between the German Heeresgruppe Nord and Heeresgruppe Mitte, in what would eventually become a drive from Lithuania to the Baltic coast near Riga. Air support was very important to the Red Army, and 3. Vozdushnaya Armiya (3. VA or 3rd Air Army) was the headquarters primarily responsible for this sector of the front. 1.GBAK was one of its main offensive weapons, and the Petlyakov Pe-2s flew bombing missions most days.

On this particular afternoon, 97 Pe-2s in three separate formations were ordered to bomb German positions at Akmene, Rokiškis and Pandėlys, in northern Lithuania. However, just as the crews of 128.GBAP (128th Guards Bomber Aviation Regiment) were about to release their bombs at 16:30 from an altitude of 1.100 metres, two Luftwaffe fighters attacked from behind and below. It seems that the Germans were able to take advantage of the cloudy weather to achieve surprise, and in a matter of minutes, three Soviet bombers had been shot down, and another was badly damaged.

Checking the Luftwaffe records, Leutnant Otto Kittel submitted victory claims for two Pe-2s shot down from an altitude of 1.000 metres at 15:42 and 15:43 (German time was an hour before Soviet time). Kittel was an excellent fighter pilot, and by this point a very experienced one, for he chose the exact moment when the escorting Soviet Airacobras moved too far away from the Pe-2s. He and his wingman then conducted attacks, successfully targeting the first and second groups of nine from the 128.GBAP. Kittel and his comrade also tried to attack the third group of nine, but thanks to the arrival of some Airacobras, those Pe-2s escaped unscathed.

It is noteworthy that amongst the Pe-2s that day were aircraft from the all-female 125.GBAP. The ladies escaped the attention of the German fighters, but one aircraft was hit by anti-aircraft fire, and pilot Yelena Kulkova-Malutina was badly wounded in the stomach. She later recalled: “it turned out to be very serious, as are all wounds in the belly“. She just managed to make it back to a fighter unit base, which was closer to the front than her own airfield, and her life was saved by Soviet doctors.

1.GBAK was understandably chastened by its experience, losing four aircraft to a single German Rotte, and in its war diary the unit blamed the poor fighter escort provided by the Airacobras for the disaster. Apparently, eight Soviet fighters were flying too far forward and in clouds, and the remaining twelve Airacobras were too far to the rear, leaving eighteen aircraft of 128.GBAP without cover. However, the Pe-2 losses also had a lot to do with the immense skill of Otto Kittel.

In the near future Air War Publications will be releasing a biography eArticle about Otto Kittel, written by Evgeny Velichko.