There was a considerable amount of air activity in the immediate aftermath of the creation of the Courland Pocket in October 1944, but terrible wintry weather set in during early November, almost bringing aerial operations to a complete halt. It was not until the seventh day of that month that the Germans and Soviets could send out more than a handful of aircraft.

7 November was a special day for the Soviets, being the anniversary of the October Revolution, but it fell right in the midst of a quieter period on the Courland front, with both armies recuperating from their exertions in the First Battle of Courland. During the day, the Soviet army pushed forward around the dividing line between the two German armies, the 16. Armee (on the eastern half of the peninsula) and the 18. Armee (on the western half), but achieved no significant success. In the 18. Armee sector, the Soviet 1. Baltic Front focused its efforts around the town of Preekuln, and it was there that the respective air forces also sent the majority of their operations. In the 16. Armee area, air activity was restricted to just a handful of reconnaissance flights from both sides.

With sunrise around 08:00 and sunset at 16:41, there was not a whole lot of time for daylight missions anyhow, and on 7 November 1944 this lack of time for operations was exacerbated by some terrible weather. It was cloudy, overcast, and rainy, with the temperature not rising above 8 degrees Celcius for the day. As a result, many Luftwaffe and VVS (Soviet Air Force) sorties would be for weather reconnaissance.

The Soviet VVS KBF (Red Banner Baltic Fleet Air Force) was the first in action over the Courland area, sending out a pair of Il-2 anti-shipping missions to the area off Polangen, a Baltic port located between Courland and the besieged German city of Memel. German naval authorities reported attacks by Il-2s on shipping at 09:00 and 11:00. Shturmovik-equipped units 8.GShAP and 47.ShAP of 11.ShAD sent out seven and eight aircraft respectively on anti-shipping strikes, with four Yak-9s providing escort.

It was not until 14:00 that the first German aircraft were able to take to the grey skies. Fw 190s from the Frauenburg-based ground-attack unit III./SG 3 were dispatched to the Preekuln area to attack vehicles, something which they did successfully. Oblt. Wilhelm Meyn was one of those taking part, and he dropped his bombs accurately during what was his 642nd Feindflug. No enemy fighters were encountered.

Twenty minutes later, a very experienced Rotte from German short-range reconnaissance unit Nahaufklärungsgruppe 5 took off from the same German air base, with the intention of reconnoitring the sector of the front ahead of XXXVIII. and L. Armeekorps, which occupied central Courland. The Rottenführer was future Ritterkreuz winner Oblt. Dr. Wolfgang Schulze, and accompanying him was Lt. Horst Schellack. The pair completed their assignment despite the weather, and reported sighting a total of 575 enemy vehicles. These and other reconnaissance results brought back by NAGr. 5 prompted 16. Armee to warn all of its subordinate units that a renewed Soviet attack was likely in coming days. 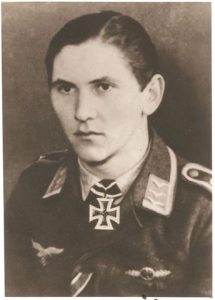 Hans-Joachim Kroschinski was victor in combat on 7 November 1944, but six weeks later would be severely wounded over Courland, losing his eyesight and one of his legs. He would pass away some 50 years later.

There was only one air combat over Courland on this day, during a sweep by eight Fw 190s of I./JG 54. Of the four Il-2 victories claimed by the Luftwaffe, three of them fell to one of Jagdgeschwader 54’s many experts, Hans-Joachim Kroschinski. From the Soviet side, the 3.VA (3rd Air Army) sent out a small mission of four Il-2s from 335.ShAD and five escorting Airacobras from 190.IAD on offensive reconnaissance in the area of Sepeneskrogs-Lieldrogas-Mezhenieki, where they ran in to what the Soviets reported as a dozen Fw 190s. One of the Il-2 crews claimed the destruction of a German fighter, and the escorting Airacobra pilots also claimed three Fw 190s shot down. This was another case of Soviet and German optimism, with only one Il-2 lost (from 826.ShAP) against four German claims, and no I./JG 54 losses against four Soviet claims.

Later in the afternoon another 3.VA mission was sent to the Preekuln area, an armed reconnaissance by a pair of Il-2s from 211.ShAD, but on this occasion they met no German aircraft.

3.VA, which was responsible for operations over western Courland, reported a total of eighteen sorties, including the two Il-2 missions mentioned above. 15.VA supported 2. Baltic Front in eastern Courland, and undertook 30 sorties for the day, losing a pair of Il-2s to anti-aircraft fire in the process. Aside from the morning Il-2 missions to Polangen, air action by the VVS KBF over the Baltic Sea was only on a very limited scale: it dispatched several Yak-9s and Pe-2s and a Yak-1 on sea reconnaissance.

From the German perspective, Luftflotte 1 undertook 52 sorties on 7 November, including 32 by III./SG 3, eight by I./JG 54, and twelve by NAGr. 5. The ground-attack Fw 190s claimed destruction of eight vehicles, and German anti-aircraft gunners reported the destruction of two enemy aircraft, at Autz and Frauenburg.

The weather conditions worsened in Courland on 8 November, and operations by the VVS and Luftwaffe would be severely restricted for most of the rest of the month, and during the first half of December 1944.