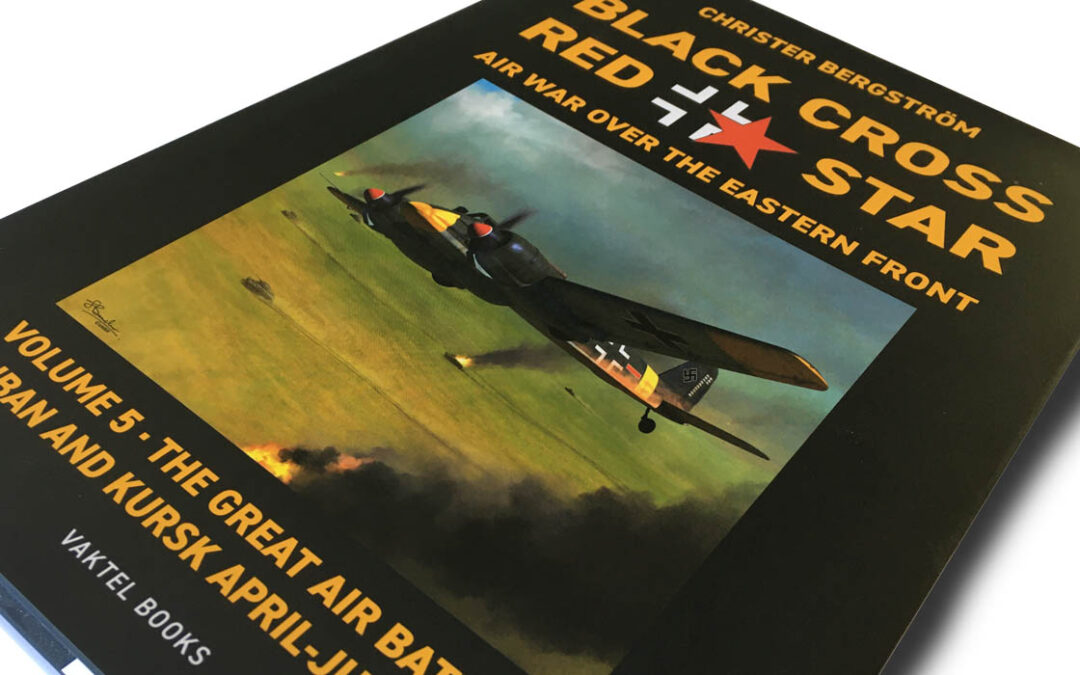 The Air War Publications team has known of Swedish researcher and author Christer Bergström since the early 2000s because of his Black Cross/Red Star books, a series for which he is highly respected and well-known. Our first contact with him was in 2004 and he has been very helpful to us ever since. Christer lives in the Swedish town of Eskilstuna, west of Stockholm, and Morten once worked for a year-and-a-half in Stockholm (2006/7), which prompted them to meet often. After work, Morten simply jumped on the train to Eskilstuna, and spent many evenings engaged in Luftwaffe discussions with Christer. Andrew also had the chance to meet Christer in 2012 at the Luftwaffe Gathering held in Copenhagen (see blog post). Over the years, this partnership has resulted in a mutual exchange of material in support of each others projects, for which we are very grateful. We hope you enjoy getting to know Christer just as much as Morten did interviewing him.

1. When and how did you become interested in researching the air war during the Second World War?
That is very easy to answer, because both of my parents worked for the Swedish Air Force, and my childhood home was filled with aviation books and talks about military aviation.

2. What was the first military aviation subject you really looked into?
The Battle of Britain. I started when I was about thirteen.

3. How did you become interested in the Eastern Front?
When I started reading I grabbed everything I could get hold of. I noticed that there was a huge amount of literature covering the air war between the Germans and the Western Allies. But when it came to the Eastern Front, there was only German accounts available in the languages I read and spoke. I wanted to know more about the Russian side, to get a more balanced view. In 1974 I was sixteen and I glued a paper on the front of a folder to collect information, and wrote ‘Black Cross/Red Star’ on the cover.

4. What was the hook, or the moment that made you realize you wanted to carry on down the path of research?
Very early in my life, when I was playing war games with my friends. At the age of ten or so. All of my friends were supporting the Allies. Also, in the comic books and magazines they were also supporting the Allies and I wanted to oppose that. Very naively as a child I started supporting the German side, but then there was also always someone playing the German when we played with the toy soldiers. I was annoyed by the strong bias towards the Allied side. Shortly after I got a friend who joined me. He was an ice hockey fan, so he sympathized with the Russians (who have a strong ice hockey tradition). So I started to question some of the accounts in the books that where portraying the Germans as always losing and stupid. So already when I was ten or eleven I started to question this strong bias. So, this is how the seed of my source criticism was planted. So when I started to research, I knew from the beginning that it is important to study both sides, in order to get a more complete picture. And just for the record, nowadays I do not support or sympathize with the German side of the war.

5. How did you manage to contact so many pilots who flew on the Eastern Front?
That was very, very easy. I got in contact with Adolf Galland in 1972 when I was fourteen, and then I met him for the first time in 1974. He opened all the doors for me. He phoned the veteran pilots and said he knew this Swedish boy, and asked if they would like to get in touch. They all said “Yes, Galland, you can give him my address”. But that was not focused on the Eastern Front, that was across all fronts. Soon after, I was invited to these Fliegertreffen and reunions and that also opened A LOT of doors. I have been in contact with German pilots since I was fourteen. I learned German, I spent summers in Germany with German friends only to learn to communicate in German, so I could talk with the pilots. I was young and I knew what I wanted.

6. What was the first book you wrote, and when was it published?
When I was about fifteen I started to write a book called Die Luftwaffe in Swedish. The aim was for it to be the complete history of the Luftwaffe. I managed to complete three volumes between 1939 to 1941, but that was refused by the publishers. My first book which was published was Luftstrid over Kanalen (Air Battle over the Channel) about the Battle of Britain, and it was published in 1983 when I was 25 years old.

7. What is your most memorable moment meeting a Second World War veteran?
That is easy – the first time I met Adolf Galland. Everything about the meeting was memorable. I clearly remember going up to the door of his office together with my father and pressing the doorbell and seeing the name ‘Galland’. Then a short-statured man came through the door and it was Galland. He asked us to step in and I was like “wow, this is really happening”. We spent some time with him in his office and I think he wanted to test me or check me out. So he took out a big, fat photo album and said: “I think you would be interested in seeing some photos?” That was his wartime photos and he started to browse them and when I saw some of the people I said: “Oh, that is Walter Oesau, that is Müncheberg, that is Mölders …”. He stood beside me and looked very amazed and said to my father: “Oh, der Junge weisst bescheid” (the young one is well informed). Later he told me that he had a strange feeling when he saw a sixteen-year-old sitting there and pointing out all of his old friends, just as if I had been there and known them. Galland said that it was a strange feeling that I was so familiar with all of them. Then we parted and he said: “Let us meet again tomorrow morning and I will take you to my home.” I spent the whole day there and we became good friends – in such a way that he took the initiative sometimes to write letters and ask if I would come visit.

8. What made you write Black Cross/Red Star books?
It was primarily because there was nothing available on the topic in a language I could read, and because of the strong bias that I saw in the literature of the 1960s and 1970s.

9. What is your current primary research focus?
My current focus right now is proofreading the updated and expanded second volume of my Black Cross/Red Star book, covering December 1941 to May 1942.

10. How has research changed over the years, do you think?
The people who really do in-depth research and are interested in their topic can become much more knowledgeable today compared to 40 or 50 years ago. There is much more material available, so the demand/expectation on the serious writers has grown.

11. If you have any advice for people getting into this field, what would it be?
To always compare what both sides say and write. Never fall into the trap of thinking that one side is more reliable than the other. When you start thinking like that, you put blindfolds on your eyes and yourself.

12. What’s been the biggest frustration in research that you’ve faced?
That so many of the German documents have been destroyed.

13. What’s one ‘wow’ moment that you’ve had in researching the air war of the Second World War?
When I went through all the British RAF loss records from the Battle of Britain and found out that they lost many more aircraft than had ever been published. It is impossible to get an exact number because there are some contradictions in some reports about losses. For example, an aircraft that was categorized as ‘Damaged Category 1’ and then you see that the fate of the pilot was ‘Parachuted’! I found about 200 additional aircraft missing compared to what was the accepted truth at the time.

14. What makes a good military aviation book for you?
New and previously unpublished information, based on primary sources, and is well written and readable.

15. As a final question, do you have a favourite Second War World aircraft, and if so, what is it?
Yes, the Ta 152 H – the one with the large wingspan. I think it was top-notch, the best among the piston-engined fighters at the time … and a beautiful aircraft! I talked with Willi Reschke about it (Ofw. Willi Reschke of Stab of JG 301). He said that to fly the Ta 152 was a life insurance. When he at one point attacked a group of Tempests, he could have bounced them and shot one down, but instead, he took the speed off and positioned himself behind a [Hawker] Tempest, just to see how long time it would take him to out-turn it. Then you are really sure that you are in a good aircraft!