19 September 1944 was another busy day in the Courland air war, and this blog post outlines one of the most significant combats to occur. Soviet units from the 3. Vozdushnaya Armiya (3.VA, or 3rd Air Army) flew 1.404 sorties over the south-eastern corner of Courland on 19 September, and arrayed against 3.VA were various fighter, ground-attack and reconnaissance units of Luftflotte 1 and Luftflotte 6.

In the mid-afternoon of 19 September a total of 45 Pe-2s were sent to bomb the German airfield at Ezere, near the Latvia-Lithuania border. The airfield itself was only quite primitive, but it was located in a very important position, right near the critical juncture between the German Heeresgruppe Mitte and Heeresgruppe Nord. This juncture had been successfully targeted by the Red Army for the past three months, and was regularly the scene of significant ground combat. The airfield at Ezere sometimes served as a base for the III. Gruppe of Jagdgeschwader 51 (Bf 109 G-6s) and the II. Gruppe of Schlachtgeschwader 1 (Fw 190 F-8s). III./JG 51 used Ezere as a forward airfield for missions over the main battle area.

The Soviet bombers came from 1. Gvardeyskiy Bombardirovochnyy Aviatsionnyy Korpus (1.GBAK, or 1st Guards Bomber Aviation Corps), flying in one group of 2 x 9 aircraft and another of 3 x 9 aircraft, while the escort consisted of Airacobras from 11. Istrebitelniy Aviatsionniy Korpus (11.IAK or 11th Fighter Aviation Corps), which put up a total of 66 aircraft. The Soviet air crews reported that bombs fell accurately on target, and at least sixteen German aircraft were claimed destroyed on the ground. 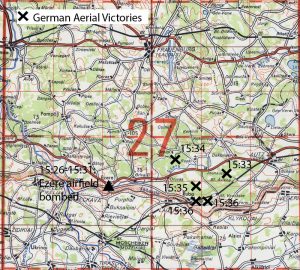 A map showing the 19 September 1944 air combat at Ezere. As can be seen, the aerial victories were all claimed as the Pe-2s exited the target area.

The Luftwaffe response involved Bf 109s of III./JG 51 scrambling from Ezere at 15:25, just as the bombs started hitting their intended target. The German pilots ignored the Soviet fighters and quickly pounced on the Pe-2s as they exited the target area. The first Pe-2 column was ineffectively attacked during the bombing run, and it was only after bombing was completed that several successful attacks were made to the east of the airfield (see map to the left for the locations and times of German successes).

Five German victory claims were submitted, the successful pilots including Ofw. Friedrich Simon, Gefr. Erich Horn (the first aerial victory of his fledgling career), and Ofhr. Ludwig Strobel of the 9. Staffel, Oblt. Helmut Besekau of the Gruppenstab, and Lt. Anton Hafner of 10./JG 51, whose single claim took his tally to a remarkable 186 aerial victories.

The Pe-2 gunners reported the destruction of five Bf 109s during this clash, and the escorting Soviet fighters were also successful. The Airacobras of 28.GIAP were led by 26-year old Cpt. Anatoly Vasilyevich Kislyakov (fourteen victories) and spotted the German fighters, but noted that they refused combat. 68.GIAP was able to engage a pair of FW 190s, and downed one of them five kilometres north-east of Ezere. The third escorting unit from 11.IAK was 72.GIAP, and it achieved the most success as it engaged the Germans during their interception of the bombers. Two Fw 190s were reported destroyed by Ml.Lt Afonin, while Ml.Lt Fedorov accounted for two more in the target area.

III./JG 51 reported two aircraft lost in combat on this date, but one of these was not directly a victim of Soviet aircraft. The German scramble from Ezere had been at the very last minute, and this would cost one pilot his life. During the hasty take-off a bomb splinter hit and damaged the tail of Uffz. Hans Bauer’s Bf 109, and as a result the 9. Staffel pilot crashed seven kilometres south-east of Ezere.

On the ground at Ezere one Bf 109 from III./JG 51 was destroyed by bombing, and there were also personnel losses: three men from the Stabskompanie were wounded, and Uffz. Paul Lehmann from the Stabskompanie, was killed. II./SG 1 losses are unknown. As a result of the bombing, the already airborne III./JG 51 fighters had to land at nearby Vainode, indicating that the airfield was rendered unserviceable (for the time being at least – III./JG 51 was back there on 22 September).

Thus ended a short but sharp aerial clash over Courland, one of hundreds to occur in that small part of the world between July 1944 and May 1945. Many of these engagements, and the entire story of the air campaign over Courland, will be covered by Andrew in his Air War Courland book.