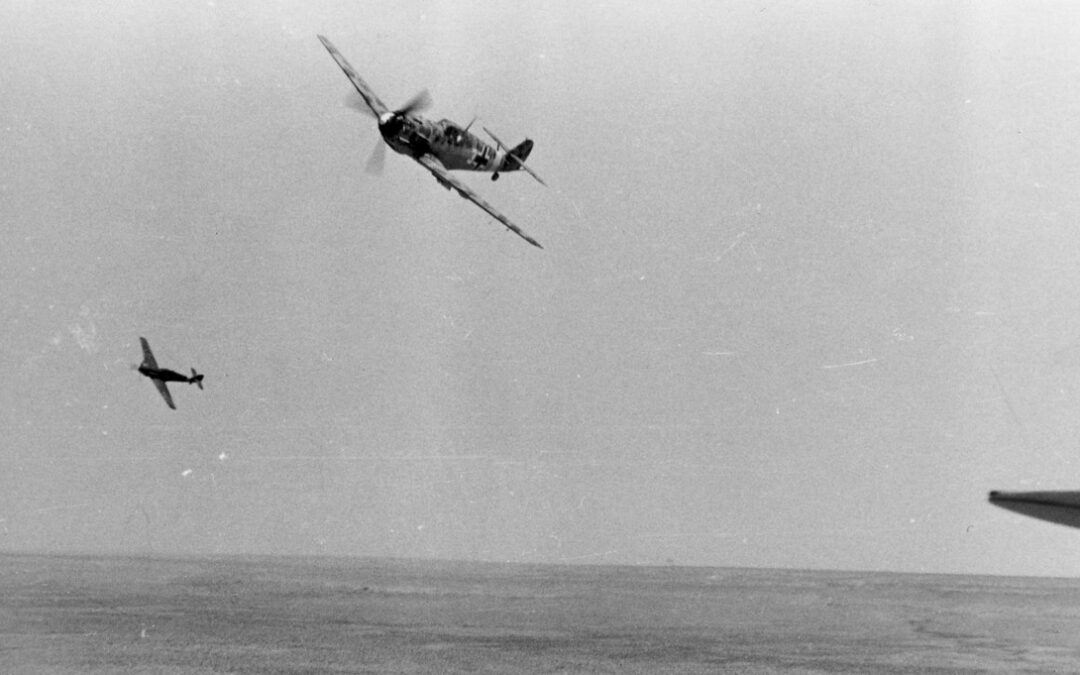 In case you missed it, Air War Publications recently released a new eArticle featuring a previously untold story about the ‘Star of Africa’, Hans-Joachim Marseille. He rose to fame serving with Jagdgeschwader 27 in North Africa in 1941, and our article focuses on one of the combats he fought in during the autumn of that year. It was a combat he was very lucky to survive.

Russell Guest, a member of the team responsible for the excellent Mediterranean Air War series, was kind enough to write a short review of the article:

“I find it fascinating that nearly 80 years after the event, and following many books on the subject of the air war in the desert and the pilots involved, and researching this area of history myself for over 40 years, that Andrew can come up with original new information on the ‘Star of Africa’. The use of original sources by Air War Publications, combined with a thorough research process, has resulted in an excellent, well-illustrated article on just one day in a long war. The article sheds new light on the combat career of Jochen Marseille, but also on the other pilots of both sides. It is particularly interesting from an Australian perspective, because both No. 112 Squadron and No. 3 Squadron RAAF were being increasingly manned by the wartime-only Empire Air Training Scheme pilots who were undertrained and very inexperienced, using ineffective combat formations. Despite this, in the end they prevailed against the Luftwaffe, but at a terrible cost in lives, particularly at the hands of the survivor of 12 October 1941, Hans-Joachim Marseille.“

Another of our regular readers provided the following comments:

“I had the pleasure to read this article yesterday evening. Marseille always fascinates me, being such an unconventional personality and excellent fighter pilot, so I was surprised to read what I can call ‘a war-day from the diary of Hans Joachim Marseille’. A peculiar day as he was shot down. I liked the approach to cover the whole day and to read it from the both sides. It is good to read that he, as good as he was as a pilot, also had to deal with the fortunes of war. This article put things in a daily perspective, avoiding the propaganda image which was created around him later on the war, and showing the harsh combat in the air.

If you want to read the real day by day strain of a war day in the air of Africa, I recommend this article. “

James Oglethorpe of the No. 3 Squadron RAAF Association had the following to say:

“Congratulations on your excellent article – I found it fascinating.  It’s great that even in 2020 you can reveal an unknown critical incident – downing of the great ace – which really deserves to be well-known (and a great ‘what if’ – had our boys been able to shoot a little straighter!). Your summation of the background, tactics etc. is also excellent for the reader to get across these key issues.  The photos are a wonderful curation and many of them are new to me.“

If you have not seen the eArticle already, we encourage you to check it out. It is a must for anyone with an interest in the desert air war and fighter aces.