Meeting A Treble One Spitfire Pilot in France 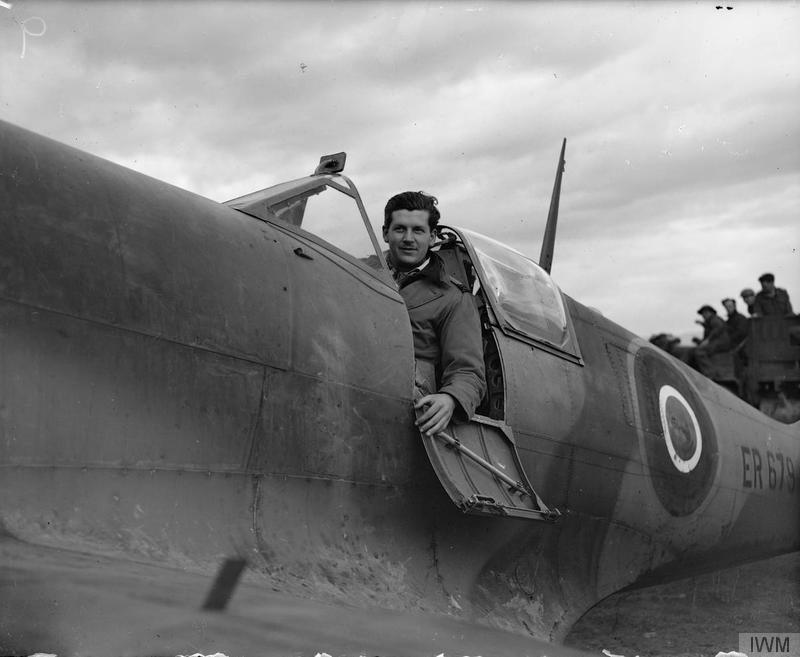 On a recent Saturday afternoon Andrew had the very good fortune to meet with one of the veterans he has corresponded with, George Heighington, a wartime fighter pilot with the Royal Air Force’s No. 111 Squadron (familiarly known as ‘Treble One’). George was with the unit during perhaps its most difficult and eventful period of service, on the Channel Front in 1942, and then in Algeria after the Allies landed in North-West Africa on 8 November 1942. 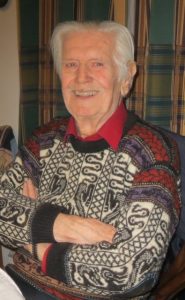 George in September 2015, a real character!

It was in Algeria that George’s war was at its most exciting, as he took part in interceptions of Luftwaffe bombing raids, managing to bring down a Junkers 88 bomber of Kampfgeschwader 60 on the early afternoon of 17 November 1942. The Germans had launched a combined raid on the harbour town of Bône, north-east Algeria, involving not only the I./KG 60 bombers, but also fifteen Stukas, five Fw 190 fighter-bombers led by Hauptmann Wilhelm Hachfeld, and a fighter escort drawn from Jagdgeschwader 51 and 53 (see Focke-Wulf Fw 190 in North Africa for more details on this engagement). Both sides suffered losses, and George was one of several Treble One pilots to claim aerial victories.

However, at this time his health was deteriorating rapidly, and by the end of 1942 he found himself gravely ill in hospital. No. 111 Squadron soldiered on in his absence, but George was sent back to England. He was never able to return to combat, but certainly saw his fair share of operations.

But back to the meeting some 70 years after the end of the war. Andrew first contacted George in 2012 regarding a couple of Australian pilots who flew with Treble One in North Africa, and a fruitful exchange of emails followed. While planning his Europe trip, Andrew mentioned to George the possibility of a visit, and was immediately answered in the affirmative. George lives in a rather unexpected part of the world for a former British fighter pilot – in the beautiful countryside of Normandy, France. So after several trains and more than four hours of travelling from Paris, the meeting finally happened. After some ‘getting to know you’ chat, a two hour interview followed, and then dinner, and of course, given it was France, a little wine.

The evening flew by, with George sharing plenty of tales about his comrades and experiences. Treble One seems to have been home to more than the usual share of men who led fascinating lives, perhaps none more so than one of the CO’s in George’s time, the hugely respected A.B. ‘Tony’ Bartley (whose book, Smoke Trails in the Sky, is highly recommended). Bartley was a fine pilot and unit leader, claiming twelve aerial victories, and after the war he married actress Deborah Kerr and became involved in screen writing and production. Several other Treble One alumni also went on to prominent roles in business and the military in different parts of the world. The mix of nationalities (George served with Brits, Czechs, Canadians, Australians, Rhodesians, and New Zealanders), and the way that they all got on so well together, was one of the things really emphasised during the interview. George also shared some photos from a large batch he has from England and North Africa, featuring a good percentage of the unit’s personnel from that time. 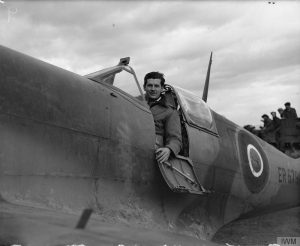 A nice shot of Tony Bartley in his Spitfire. George talked of his great respect for Squadron Leader Bartley. (IWM)

George has written his own book, titled A Good Time To Be Born, which is well worth a read, and can be found here. Aside from providing a nice tale of the career of a British fighter pilot, it also provides lots of details about growing up in pre-war Britain, a very different place to the Britain of today.

And since that meeting Andrew’s Europe trip has carried on, to Frankfurt, Prague, Berlin, and now Copenhagen. There have been lots of meetings with fellow aviation enthusiasts and historians, and plenty of sight-seeing. But soon it will be time to return to Australia, to begin the final stage of the Air War Courland project – writing the book!