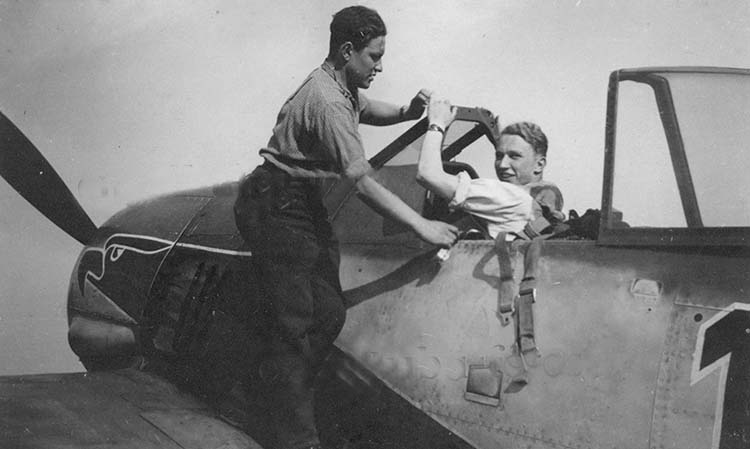 Now available from the Air War Publications website is our Horst Hannig biography eArticle, written by Leo Etgen and Andrew Arthy. This is the latest in our series of Jagdgeschwader 2 pilot biographies, although in this case the subject is more famous for his service with another unit, Jagdgeschwader 54. Leo and Andrew have told Hannig’s story using a wide variety of primary and secondary sources.

Horst Hannig joined the Luftwaffe as a very young man, and by the age of 21 he had already earned himself the Ritterkreuz for shooting down 48 Soviet aircraft on 200 combat sorties. He joined the 6. Staffel of Jagdgeschwader 54, the ‘Grünherz Geschwader‘, in early 1941, but did not claim his first aerial victory until the opening day of BARBAROSSA, the German invasion of the Soviet Union on 22 June 1941. After that, his score climbed steadily, and he never made more than four aerial victory claims on a single day.

In the winter of 1942/1943 Horst Hannig was ordered from the Eastern Front to the West, arriving just as the situation began to swing towards the RAF and USAAF on that front. Lt. Hannig proved himself an adept fighter pilot against his new opponent, downing eight British and American aircraft in the space of four months.

Leo and Andrew’s text is complemented by fourteen photographs of Hannig and his aircraft, and some other shots related to his story. An overview map shows where he served between 1941 and 1943, and there is also an excellent colour profile of his well-known Fw 190 A-4 by artist Juanita Franzi.