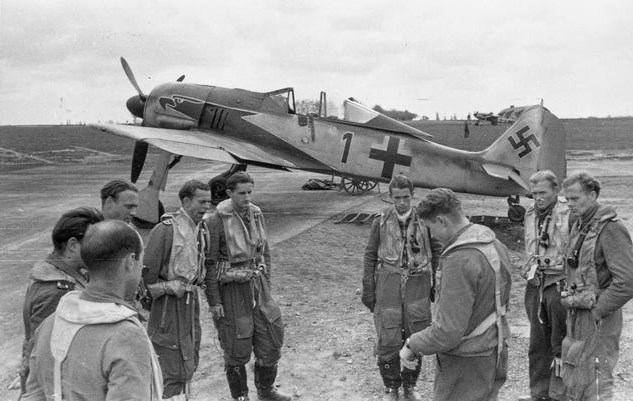 In August 2019 Air War Publications released an eArticle about the life and Luftwaffe career of Horst Hannig, a fighter ace who served with Jagdgeschwader 2 and 54. After claiming the destruction of 98 Soviet, British and American aircraft, in the spring of 1943 he met his end in an aerial combat.

Hannig’s final victory came in a clash with RAF fighters taking part in Circus 297 on 15 May 1943. As described in our eArticle, Horst Hannig would not long survive his final victory, falling victim minutes later to a Spitfire from either No. 341 Squadron or No. 611 Squadron. The photograph at the bottom of this blog post is the sad result of that combat.

The man who shares the tombstone with Horst Hannig was Fritz Stückemann, an Unteroffizier from Hannig’s I. Gruppe of Jagdgeschwader 2, who was shot down and killed on 27 July 1943. Unlike Hannig, Stückemann was a relative newcomer to the rigours of aerial combat. He was born on 1 December 1920 in Heepen, on the outskirts of Bielefeld in central-western Germany.

Uffz. Stückemann belonged to the 2. Staffel, and was bested in combat on the evening of 27 July 1943 at Annebault, sixteen kilometres north-west of Lisieux and not far from the Channel coast. He had been flying an Fw 190 A-6 with the Werknummer 550 161. Aircraft of I./JG 2, 11./JG 2 and II./JG 2 had scrambled at 18:00 as the B-26 Marauders of Ramrod 164 approached to bomb Tricqueville airfield, the home of I./JG 2. In subsequent combats, escorting Spitfires from the Biggin Hill Wing inflicted heavy casualties on the Richthofen Geschwader.

Given the location of No. 341 Squadron’s claims (south of Trouville), it was probably responsible for the loss of Fritz Stückemann. Amongst the claimants was Sgt. Pierre H. Clostermann, and he described the combat in his famous memoirs: “The sky was now full of Focke-Wulfs, brushing past me, attacking me on every side in a firework display of tracer bullets … Martell [who claimed two victories himself in this battle] confirmed my first success. He had seen the Focke-Wulf set on fire. The second would probably be confirmed by the film.“

Thanks to French researcher Frédéric Quesnel, we are able to include some extracts from the condolence letter written to Fritz’s family by the Heepen authorities:

“I have learned that your son, Unteroffizier Fritz Stückemann, lost his life in the struggle for the freedom of our fatherland and for his Führer. On behalf of the Amtes and the community of Heepen, I would like to express my heartfelt support to you for your heavy loss. May the certainty that your son died a flier’s death in order to protect his homeland from the incursion of the enemy and to secure our freedom be some consolation in the heavy suffering that has hit you so hard.“

Although not as well-known as Hannig, Stuckemann’s fate was one shared by thousands of young men in the skies over Europe. The simple grave marker stands as a poignant reminder as to the great leveller of death; that no matter the rank, the allegiance or the skill, all men of all nations involved during the war are worthy of remembrance for making the ultimate sacrifice.