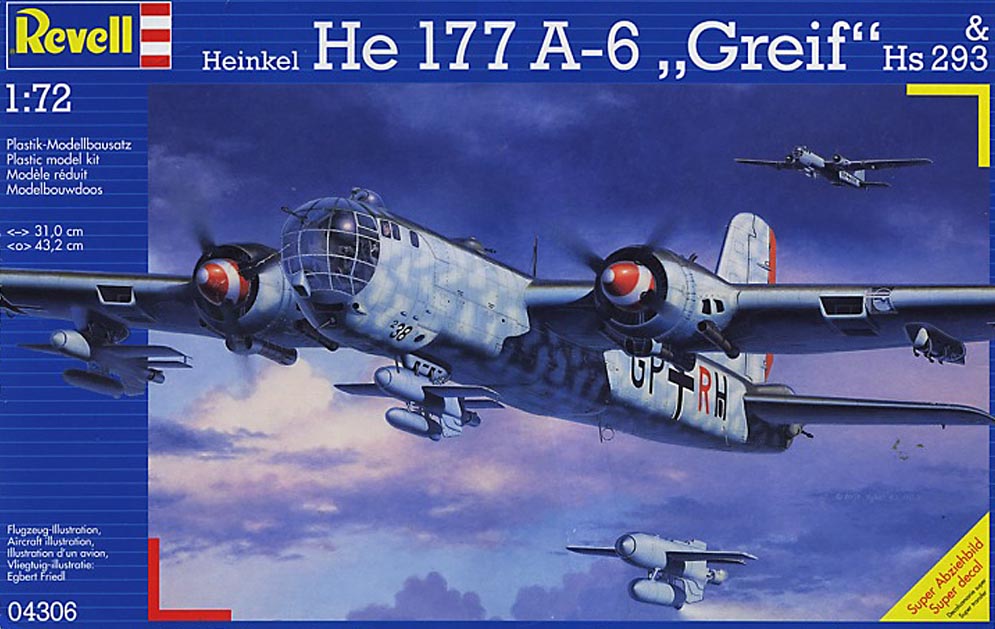 Most people who have built plastic scale models of aircraft are familiar with the company name Revell. However, we wonder how many of them are aware that the founder of German Revell was a Luftwaffe veteran who flew missions during the Second World War?

Heinz-Georg Schöneberg, Luftwaffe Pilot
Andrew was going through his logbook copies when he found the Flugbuch of Heinz-Georg Schöneberg, a former member of Kampfgeschwader 100. Flieger Schöneberg made his first training flight on 21 September 1940 at Prag-Gbell (modern Czech Republic). Over the winter of 1940/1941 he was promoted to Gefreiter, and on 19 March 1941 he piloted an aircraft for the first time (in this case a Focke-Wulf 44), making his first solo that day as well. It must have been one of the more memorable of his life, as he took to the air by himself on many short local flights.

June 1943 saw him with the 4. Staffel of Kampfgeschwader 100 at Peenemünde undertaking training with the new Hs 293 anti-shipping weapon. Practise flights continued until mid-July 1943, when the unit transferred to France in readiness to enter combat. On 9 September 1943 the British and Americans landed at Salerno in southern Italy, and this was the catalyst for II./KG 100’s first missions with the Hs 293. However, Heinz-Georg Schöneberg’s debut was inauspicious – he took off from Istres at 10:31 on 11 September in Do 217 ‘6N + LM’ but had to return early, landing again an hour after midday. His next operational flight followed on 18 September, this time a sea rescue search.

4 October 1943 – A Harsh Combat Debut
Finally, on 4 October Schöneberg was able to note a Feindflug (or operational mission) in his Flugbuch, when he participated in a large and successful dusk attack on Allied Convoy Dunnock (UGS.18) off the North African coast. It was a very hectic mission on which to make his debut. Taking part were twenty Do 217s of II./KG 100 flying from Istres, alongside elements of KG 26 based in southern France, and the convoy was hit off Cape Tenez, Algeria, in decent weather. 46 of the 57 German bombers dispatched carried out attacks. The 7.130 ton English freighter Fort Fitzgerald was hit and badly damaged, and was sunk the next day. Two other vessels were hit and damaged, the Hiram S. Maxim (7.180 tons) and Samite (7.220 tons).

II./KG 100 claimed much success, including a direct hit on a transport of 10.000 tons, a hit five metres short of a 8-9.000 ton transport, a direct hit amidships on a transport ship or auxiliary carrier of 10.000 tons, a hit amidships of a 12.000 ton cargo vessel, and various near misses. Six bombs suffered technical failures, there were two misses, and one bomb was jettisoned due to enemy fighter attack.

French P-39s of fighter unit GC III/6 were patrolling when the attack occurred, and others were subsequently scrambled, and these Allied pilots determinedly attacked the raiders, claiming one German aircraft destroyed and another probably destroyed. In return, KG 100 gunners claimed the destruction of a Spitfire [sic] at 18:54 (and a Beaufighter shortly afterwards, at 19:20). However, the skies soon became too dark for the Frenchmen and they returned to base. II./KG 100 crews saw one Do 217 going down in flames with an Allied fighter close behind it, and one German crewman was seen to bail out.

I./KG 26 lost two aircraft in the Mediterranean Sea on this mission, and two others were damaged on landing back in southern France. The losses for Heinz-Georg Schöneberg’s II./KG 100 were quite severe. The Kommandeur, Hptm. Heinz Molinnus, was lost with all of his crew, as was the leader of the 6. Staffel, Oblt. Wolfgang Böttger. Three other aircraft crashed on landing in the dark in southern France, and amongst the unfortunate pilots was Heinz-Georg Schöneberg in his Do 217 E-5 coded ‘6N + FM’.

“… As a result of small ships being difficult to see during the time of the attack, the main effort had to be shifted to the targets which were more easily visible. The destruction of/or at very least most severe damage to, 60,000 tons of merchant shipping can be counted on. The effect of the attacks by the missing or crashed crews (the latter with a specially well aimed bomb) are left out of account. The matter of technical failures is being followed up.“

Further Operations
II./KG 100 was back in action on 21 October with thirteen Do 217s against another Allied convoy, alongside 28 He 111s and eight Ju 88s of I. and III./KG 26. Schöneberg and his crew were airborne from Istres in their Do 217 between 15:10 and 21:25. On this occasion American fighters from the 345th FS/350th FG intercepted the Germans and claimed success, and the convoy also put up a smoke screen. Two Allied vessels were sunk, but numerous Luftwaffe aircraft were downed in exchange, with KG 26 particularly hard-hit. A shadowing aircraft from 1.(F)/33 was also attacked and ditched in the ocean, with the entire crew rescued 48 hours later by a Polish destroyer. This would be Schöneberg’s last mission of the year.

In February and March 1944 4./KG 100 undertook conversion to the Heinkel 177 at Leck and later Aalborg in Denmark. Bomb-dropping training was then carried out from Garz in Mecklenburg-Vorpommern in May 1944 (Schöneberg recorded two direct hits in two practise flights on the 23rd). Despite the Anglo-American landings at Normandy, II./KG 100 continued practise flying throughout the summer. The last flight recorded in Heinz-Georg Schöneberg’s logbook was on 12 August 1944 at Aalborg-West in Denmark. It is not known how he spent the last nine months of the war.

This was one of those strange sequence of events that sometimes happen in research and lead to unexpected discoveries. So next time you see a Revell aircraft model, remember that it is the result of the efforts of a man who flew dangerous missions himself during the Second World War.