Battling for Budapest: Luftflotte 4 in December 1944 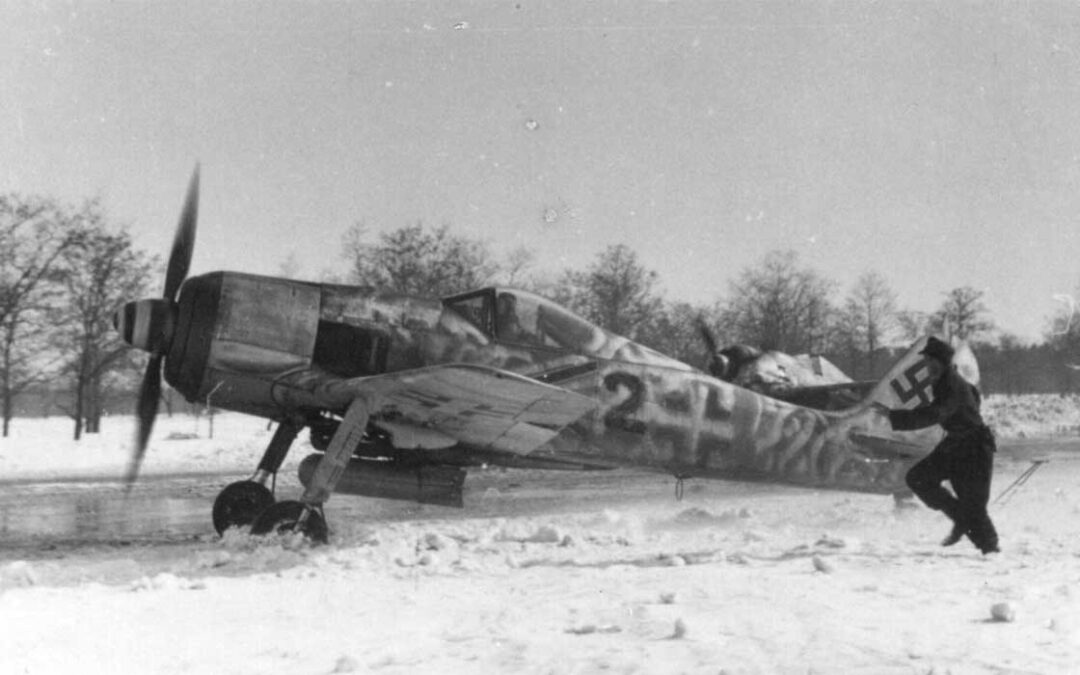 In the final months of 1944, the Germans and Soviets were locked in a bitter battle for the Hungarian city of Budapest, and the Luftwaffe played its part in this fighting. The Red Army had begun an offensive in Romania in the late-summer of 1944, and by October 1944 they were approaching the Hungarian capital. On 29 October, General Armii Rodion Malinovsky’s 2. Ukrainian Front began an advance through Kecskemet and Kiskoros to the southern approaches of Budapest. The Soviet troops were stopped just short of the city on 3 November by ad hoc German and Hungarian forces, but it had been a big scare for the Axis commanders. A map of the Hungarian fighting between October and December 1944 can be viewed at this link.

In the air, the Germans could call upon the fighters and ground-attack aircraft of Luftflotte 4, including the aces of Messerschmitt 109-equipped Jagdgeschwader 52, Schlachtgeschwader 10 with the Focke-Wulf 190, and Hans-Ulrich Rudel’s Schlachtgeschwader 2, which had a combination of Fw 190s and Junkers 87s.

In late-November and early December, 3. Ukrainian Front attacked across the Danube 175 kilometres south of Budapest and began driving north and north-west towards Lake Balaton and the area south-west of Budapest, creating another threat to the Hungarian capital. Bad weather limited Luftflotte 4 operations in the final days of November, so the Heeresgruppe Süd defenders lacked close air support at a vital time. Helmut Lipfert of 6./JG 52 recalled the situation in Hungary in December 1944: “We did what we could, but the poor weather often hindered our operational activities.” 54 ground-attack aircraft from Luftflotte 4 did get airborne after midday on the opening day of December, and then on 4 December, the Germans and Hungarians committed 80 ground-attack Fw 190s, 25 Messerschmitt 210s, six of Hans-Ulrich Rudel’s anti-tank Ju 87s, seven Henschel 129s, 38 Bf 109 fighters of JG 52, and eight Bf 109 reconnaissance aircraft. A Stuka pilot from III./SG 2 recalled the situation in this period:

“The I. Gruppe of the Geschwader was equipped with the Fw 190 and was based at Csor, not far from our former airfield at Varpalota. They were supposed to provide fighter protection during our missions, as the protection provided by Jagdgeschwader 52 could no longer be reliably guaranteed.”

5 December 1944 was a crucial day, as 3. Ukrainian Front troops approached the north-eastern end of Lake Balaton, and 2. Ukrainian Front attacked north and south of Budapest. In the air, Luftflotte 4 was able to put up a remarkable (for this stage of the war, at least) 392 sorties, more than half of which were by the Fw 190 units. The newly appointed Kommandeur of I./SG 2, Hptm. Ludwig Bauer, downed a Yak-9 south-west of Budapest, while the Fw 190s of I./SG 10 and the Ju 87s of III./SG 2 were also active. The Stukas operated south of Budapest between 13:30 and 14:40, bombing targets in a forest, and encountered fighters and anti-aircraft fire. Soviet troop crossings on either side of Csepel Island in the Danube River were also targeted, as one pilot recalled:

“On one occasion we caught them when they brought their soldiers across the river on pontoons to form a bridgehead on the west bank of the Danube. Tightly packed, the Ivans stood in the floating vehicles, which were clear targets for us to spot. It was like target-shooting. The effect must have been terrible. ”

The German fighters were also active, and there were fourteen victories claimed by Luftflotte 4 fighter pilots on 5 December. Aces of II./JG 52 like Friedrich Haas, Helmut Lipfert and Heinz Ewald were all successful in combat.

Despite all the German aerial activity on the fifth, losses were only slight. Amongst the fighters, three Bf 109s were damaged in combat, a pilot of II./JG 52 bailed out of his Bf 109 G-14 after a duel with Soviet fighters, and one fighter was destroyed by Soviet ground fire. The ground-attack units reported one Fw 190 lost to anti-aircraft fire, while a Hs 123 taking part in the operations to Csepel Island was also downed by Soviet anti-aircraft gunners (see Morten Jessen’s article on Hs 123 operations for more about this remarkable Second World War ground-attack aircraft).

Hard fighting continued over the next couple of days, and by 8 December, Red Army advances to the north and south-west of Budapest placed the city in an eastward-facing bulge, leaving the German and Hungarian defenders very vulnerable to encirclement. It would not be long before the encirclement was completed, but that is another story.