The Value of the National Archives in Researching the Luftwaffe 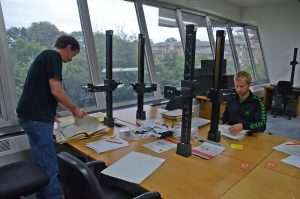 Andrew and Morten in the Research Room at the National Archives in Kew, London.

Part of the fun of research is in tracking down new information and filling in the blanks. And when dealing with the Luftwaffe, there are a lot of blanks! This is because thousands of records pertaining to operations, losses, movements, orders, and a plethora of other subjects were destroyed by the Germans during the closing months of the war. This often leaves researchers frustrated in their efforts. Yet a valuable source of information comes from the various Allied wartime intelligence services. The sources we at Air War Publications have found most useful fall into two categories: signals intelligence and prisoner interrogations. From these two sources, we have gleaned a veritable treasure trove of information, which has then found its way into our various publications. The information from these sources often adds to the documented narrative provided by war diaries, logbooks, and other assorted official documentation. The difficulty, however, is accessing such sources. Both based in Australia, Andrew and Adam have quite a bit farther to travel than Morten to reach the National Archives in London, though even for Morten it’s still quite a trip from Denmark. Yet there is good news.

Several years ago, the National Archives in London began the process of digitising some of its collection. Included in this mammoth task were the files marked ‘Intelligence from Intercepted German, Italian and Japanese radio communications, WWII’, or better known as the DEFE 3 files. These files contain a variety of material and cover several days at a time. While they may appear to some, at first glance, overwhelming, they are relatively simple to navigate, once you know what you are looking for. 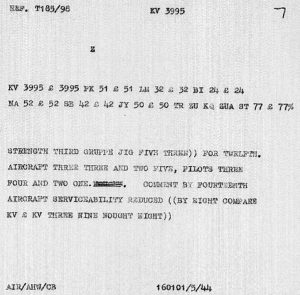 An example of a DEFE 3 signal. This one is a strength return for III./JG 53. Note the use of code words like “JIG” for Jagdgeschwader. The original German signal was much more detailed, but here the Allies have reduced it to the essentials.

As with the example to the left from DEFE 3/155 concerning the dates ranging between 12 and 16 May 1944, once you know how to translate the jargon you are well on your way to a much deeper insight into your research than perhaps would have been gleaned from simple logbooks and war diaries. Taking a closer look at this example, we are dealing with the III. Gruppe of Jagdgeschwader 53 for 12 May, where JIG represented the Jagdgeschwader (fighter unit). This coding practice was applied to all unit types, and so anyone looking for information on transport units would be after references to TARE, while short-range reconnaissance units were designated as HARRY. For bombers, it was the designation KING that referenced a particular formation, while FOX was the term denoting a long-range reconnaissance unit. Similarly, SUGAR (or sometimes SUGAR GEORGE) was for Schlachtgeschwader; NAN JIG was Nachtjagdgeschwader, NAN SUGAR was Nachtschlachtgruppe and ROGER TARE stood for an Ergänzungsgruppe. At the command level, these became JIG KING for a Jagdkorps and JIG DOG for a Jagddivision. Back to the example, the number of total and serviceable aircraft is given, but rather than simply recording them as 33 and 25, it is written as three three and two five. DEFE 3 is not particularly user-friendly!

Another problem with the DEFE 3 material is that there is no system to how the files are catalogued – you just need to have patience and a bit of luck searching the National Archives search engine, Discovery, which can be found at http://discovery.nationalarchives.gov.uk/. Once you find the file you want, it is a simple process of downloading and beginning your research. However, a word of caution – these are big files, often in the range of 250-350 megabytes, so watch any download limits you may have.

While the DEFE 3 material is freely available online and provides a lot of information, especially after the mid-war cracking of German codes, it is a tedious process to sort through so much jargon and double speak. Thankfully, that is where the HW 5 series comes in handy. HW 5 presents mostly the original, full-length signals from which DEFE 3 was summarised, and HW 5 is presented in a much more convenient and logical sequence. Here there is no coded language, but just plain text. Thankfully too, unlike the DEFE 3 material, HW 5 is catalogued in a chronological fashion, starting in February 1940 with HW 5/1 and ending on 23 May 1945 with HW 5/703. However, again there is a word of caution – HW 5 presents everything it finds. While each file is broken into regions, it spouts what the Allies decrypted like your average five-year-old recounts a day in the playground; as and how it happened, usually completely unedited and unabridged. An example could be a signal declaring intentions for a certain operation, but the operation might not have taken place because of circumstances, so the researcher needs to confirm that the intentions became a reality. HW 5 is a real mixed bag of material. A strength return for obscure types of supplies for a Luftwaffe construction unit based on Sardinia might appear next to signals that helped shape the course of the war, such as orders from Hitler to his senior commanders. Thus it is a bit of a treasure hunt to find the gold you are seeking. 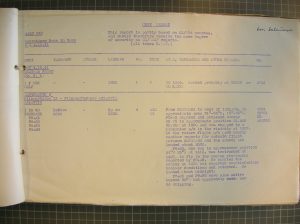 An excellent example of what kind of detail one can be lucky to find in intelligence material.

The level of detail in both HW 5 and DEFE 3 varies, depending upon the time frame in question. Obviously this relates to the ability of the Allied intelligence community to read and decipher Luftwaffe signals. Yet, not all intelligence was so difficult to come by. Still within the range of the HW classification, this time in HW 13, there are dozens of files detailing intercepted radio chatter of German bomber, reconnaissance and fighter units whilst on operations, which is combined with the signals intelligence found in HW 5 and DEFE 3. While most of the fighter-related material dates merely to late 1944 and early 1945, the material for bomber and reconnaissance units covers 1941-1944 for the Western Front, and 1941-1945 for the Mediterranean Front. The level of detail for the units – which include maritime units such as Küstenfliegergruppe 706, bombers of KG 40, and reconnaissance elements of 3.(F)/122 to name just three – varies from day to day and is dependent upon the security-consciousness of the crews involved in the various operations, and whether the Allies intercepted any signals reporting details about the relevant mission. Yet, buried within these files are multiple avenues and sources of information not otherwise recorded elsewhere.

Aside from the impersonal data such files offer, there remain two further sources that researchers can access at the National Archives to help them in their search for answers. Stepping out of the HW series, two other, far more personal, data sets are available to help flesh out the research process. The first, and more widely known, is the interrogation reports of captured airmen. These files – which sometimes run to several pages – very often include details like the captured airmen’s story of his last flight, his aircraft’s code, the purpose of his operation and, depending upon how much the captured man was willing to talk, information about other elements or personalities of his unit. It is in these files that researchers can gain an insight into the social dynamics of crews and their units, and this becomes especially useful when married to the secret recordings made by British intelligence of prisoners left to chat quietly amongst themselves in rooms specifically wired to capture such conversations. It is in these files that the true insight into the German Soldaten can help furnish a more nuanced and insightful research outcome.

Research is a deeply rewarding exercise in itself, but it is finding those little nuggets of information and being able to share them with others that makes the process of creating an eArticle and researching for a book so enjoyable. Although time-consuming to explore, intelligence files like those described above provide a wealth of information, without which we here at Air War Publications would find it difficult to bring you the quality that we continually strive to deliver.