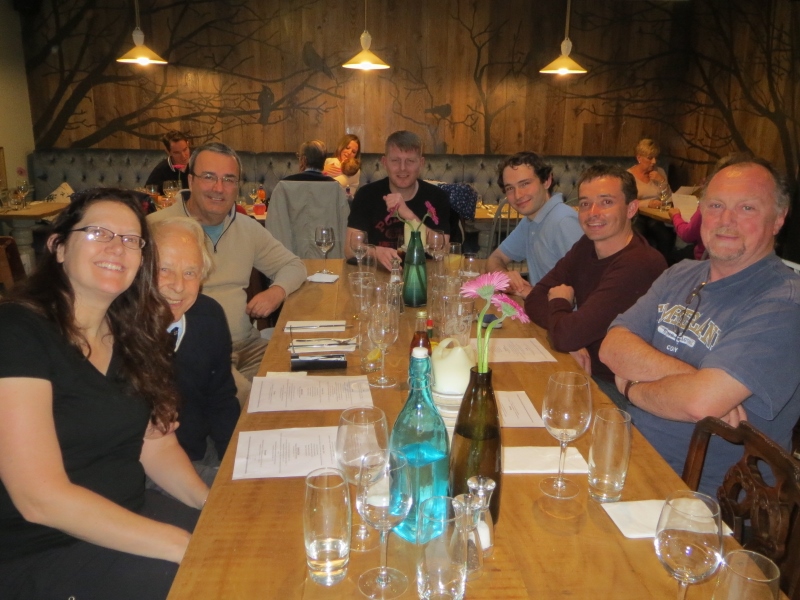 Andrew is currently in London on the first stage of his Europe trip, and organized a little get-together of some friends and colleagues on the evening of Saturday 5 September. Most of the attendees had spent the day researching at the National Archives, and then gathered at a nearby pub for dinner, drinks, and plenty of aviation history talk. Taking part in the London meeting were Heather and Charley of the World War II History Project (http://www.ww2historyproject.org/), Clint from the Luftwaffe Research Group (http://luftwaffe-research-group.org/index.php), Dave West (Morten’s co-author on the Henschel Hs 123 project), and Luftwaffe researchers Steve and Dan.

A very enjoyable evening was had, with Charley sharing a few stories from his time with the 21. Panzer–Division of the Deutsches Afrikakorps in 1943, and subsequently in Allied captivity. Below is an after-dinner shot. Thanks very much to those who attended – we appreciate the amount of travelling you all did, and hope you enjoyed the evening as much as Andrew did.

Andrew has been busy at the National Archives, photographing thousands of pages of documents (43,000 so far!), including interrogation reports for German airmen, ULTRA signals, and a whole lot more. This material will contribute not only to his Air War Courland book, and the next Fw 190 in the Mediterranean book, but to various other Air War Publications books and eArticles. Last Thursday he was able to find the wartime United States Army Air Force reports on their 20 December 1943 raid on Bremen, a bombing mission to be described in Adam Thompson’s forthcoming eArticle. So plenty more material to ensure that our publications are as complete as is possible!