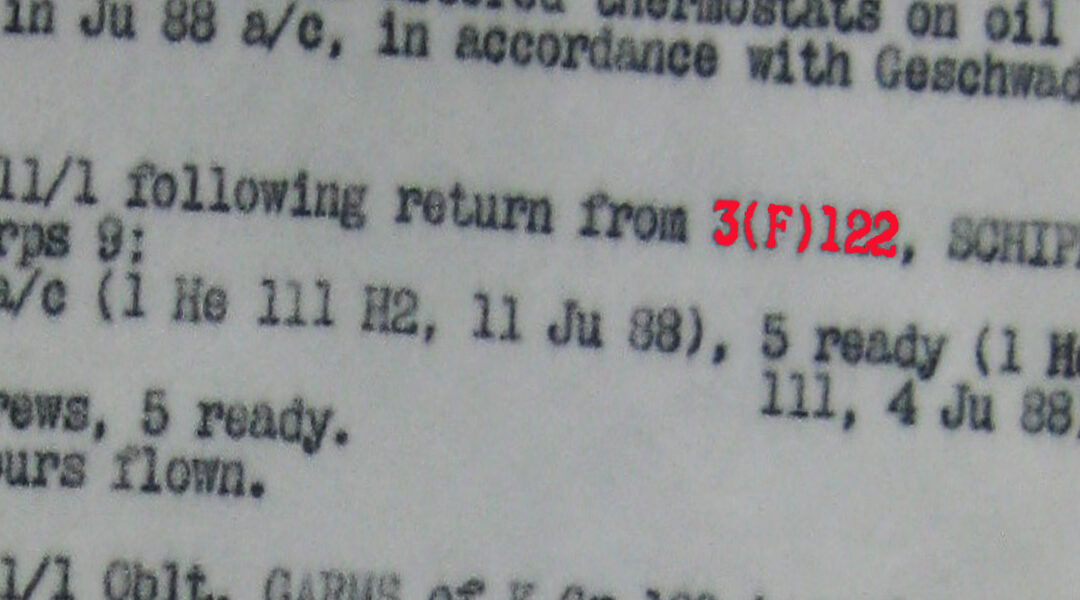 As part of our series of interviews with writers and researchers in the Luftwaffe community, we present the responses of Andy Mitchell, whose site LuftwaffeData focuses primarily on German long-range reconnaissance unit Aufklärungsgruppe 122, but also includes sub-pages with a variety of other material. In addition to these efforts, Andy’s research into the DEFE 3 category of ULTRA signals from the British National Archives will be hosted in the Research Section of the Air War Publications website in the future. Recently, Adam spoke with Andy about where it all started and just how his interest in the Luftwaffe developed.

Where did your interest in aviation start?
When I was six or seven I joined the Air Cubs [a Scout group with an aeronautical focus] – this did not last long as I hated the Sunday services at the local Church. I discovered the Victor comic a few years later and read this avidly; it mixed comic fiction with illustrations of true stories about the men receiving gallantry medals in the Boer and First and Second World Wars, with fictional heroes such as Matt Braddock. One series had Matt flying a Beaufighter night fighter during the Blitz and another fighting the Japanese with a Tsetse Mosquito. From there, at the age of about twelve, I graduated to the Flying Review International magazine (still have most of them) and at thirteen or fourteen joined the Air Cadets (more Sunday parades and square bashing). I left the Air Training Corps at about seventeen, as it was getting in the way of my studies, but it allowed me glider flying at Kenley and West Malling and Air Experience flying from Manston. It also gave me an unfulfilled ambition to join the RAF.

We lived five miles away from Biggin Hill airport and each year there was the RAF at Home Battle of Britain display, which was very big when I was young, and I used to watch the displays from our back garden. Eventually, when I was about eight or nine, dad took me there – we walked … or cycled … can well remember getting there very early and being able to look inside a Lancaster and walk beneath Vulcans and Victors (we were there so early the barriers had not been put up). Seeing a Valiant, a Victor and a Vulcan in anti-flash white, side-by-side on the hard standing, is a fond memory. Sitting on the top of the dispersal bunkers near the tower when the Lightning display team were overhead was something to remember – they flew down the runway at zero feet, pulled the stick back for a vertical climb and lit the afterburner! Another memory is being on my dad’s shoulders in order to see over the crowd when the USAF F-100 Super Sabres were displaying – straight over the crowd, deaf for minutes afterwards!

Later in my early teens I went to both the Battle of Britain display and the Air Fair (entrance fee 7/6d, or 37.5 p in new money). Making model aircraft (Airfix, Frog, Revell etc.) then lead to my interest in Luftwaffe markings, and on to find out more about aircraft and their operations.

Everyone has an origin story that seems to start with someone else, so what – or who – is yours?
I had started building ‘Unit Histories’ sometime in the 1990s, having obtained copies of The Blitz Then and Now from the local library and having read the ‘Operational History’ sections in William Green’s Warplanes of the Third Reich.

However, I blame Nick Beale. Back in about 2000 I purchased a copy of his Air War Italy, 1944-45 and couldn’t help notice the amount of material dedicated to Aufklärungsgruppe 122, but at the time didn’t really take it any further. But then, in about 2002 – at least I think that’s when it all started to come together – I started what eventually morphed into the Aufklärungsgruppe 122 Diary. The earliest version of that file is 2002, so it must have been around that time, but it really marked a point when I decided to collect all the information I could on the unit from published sources … quite a bit as it turned out!

But there is quite a lot of information about other units in Nick’s work, so why – specifically – Aufklärungsgruppe 122?
I have no idea. It was probably that I felt the fighter force did not interest me and neither did the bombers – I actually thought that the fighters had been done to death! – but I had been a member of the 12 O’Clock High discussion forum and the now defunct Luftwaffe Experten Message Board (and its mailing list predecessor) for a while at this point, along with other Luftwaffe-orientated fora, and eventually just posted a request for information about Aufklärungsgruppe 122. That’s when I came into direct contact with Nick, but equally as fortuitously Larry deZeng and our friend in Calgary, Dave Wadman – all of whom were a great help in supplying extra information. In fact, Larry was spectacularly helpful in as much as he provided a potted history of each Staffel for an early version of the Gruppe diary that followed. Actually, the format of my online diary is inspired by the potted history he uses in his unit histories, which he expanded in his Bomber and Ground-Attack books published years later by Ian Allan.

It’s funny that you mention “our friend in Calgary”, Dave Wadman, I too lay a lot at his feet when it comes to my journey down the Luftwaffe rabbit hole, but jokes aside, how did the people you mentioned support you?
As I said, Larry was great – his unit histories really helped set the tone. As for Dave, he was just a continued source of encouragement who was very generous with various documents and photographs he shared with me, but he really was just part of the path; Nick opened the door that led to Larry and Dave, that then led to you and Andrew and then all points onwards ….

To the website …?
Actually, the original ‘Wekusta’ website was first launched in about 2003, but the Aufklärungsgruppe 122 Wiki didn’t go live until 2008. I did launch a discussion forum in 2006 (originally on a free hosting site), no longer active, and there was never a sub-forum for fighters ….

… that had never occurred to me …
… as I said – “done to death”. As for where things are now, in recent years I have accumulated a large amount of additional data on 122 that is not yet incorporated into the website, but resides in the ‘Master’ document awaiting uploading. There are also other pieces that are sitting in the ‘to do list’ associated with other areas of the website. There are other projects as well – I would like to expand what I have on Aufklärungsgruppe 123, do more on the DEFE 3 files, actually visit the The National Archives and photograph some files, catalogue all of the target dossier files that I have, build the Zielnummer [German target numbers for bombing targets] tables up to an acceptable level, document the Bau Battallion [construction battalions] and Koflugs [air base regional commands] … and so it goes on. Oh, and build a few scale models, or should I say, complete a few models rather than start them …

Speaking of DEFE 3, how did you end up analysing that material?
Ahhh, they started when I found out from the 12 O’Clock High forum that you could download the files for free from The National Archives website, and a posting on the forum that said that there was little Luftwaffe data to be found. Once I took a look at some of the files, my conclusion was the opposite, and I started writing up the Luftwaffe items from specific files so that I had them available for future reference, together with the possibility of direct references to Aufklärungsgruppe 122 and Aufklärungsgruppe 123. I then began to share these with a few researchers – yourself, Andrew, Dan Zamansky etc. Eventually I offered them via my Wiki, publicising them via my now-deleted forum and 12 O’Clock High. In addition, I published a ‘file finder’ for DEFE 3 on the relevant Wiki page.

And then on to Air War Publications! So why the generosity in sharing the fruits of your labours?
This was the ‘giving back’ approach … an attempt, like the Wiki, to encourage others to share more openly. On the Wiki side this was not very successful, except for yourself, Andrew Arthy, Dave Wadman, Remi Traconneli, Matti S. and, of course, Larry de Zeng  – providing new articles and information to expand existing articles.

Online culture is indeed fickle in that regard. So where to from here?
As noted previously, I’m interested in accumulating, and sharing, data on the German “Target Codes” (Zielnummern) and trying to build-up details of the Luftwaffe Bodenorganisation [ground organisation]; further unit histories; articles on specific operations (for example, expanding my notes on Demyansk by use of the army-air force liaison officer reports for 16. Armee). It’s rather an eclectic mix, to be honest.

So where do you see the future of Luftwaffe research heading?
This will depend on how many more captured German documents the Russians release. But more information is becoming available from unexpected sources, for example Armeeoberkommando documents from NARA and the BA-MA contain a lot of Luftwaffe information if you are willing to dig for it …

That is where the internet has been such a help …
Indeed! It enables the sharing of information and, in recent years, large files. It is vital in developing co-operation between researchers in different parts of the world.

But the internet also has its downside. What has been the biggest frustration over the years in all your work?
My inability to directly read German – although this has improved considerably in the last few years. Using DeepL as a translation tool is much better than Google Translate. Another frustration is books (and websites) that do not quote their sources. Another frustration is people who post answers on Forums that indicate that they know the answer to a question but don’t want to post any detail because “it will appear in my next book that I am working on” – well don’t answer the question then!

I know what you mean there! Speaking of latest research, you have been very helpful in providing material to us on Luftwaffe shipping claims, which Andrew and I are in the process of incorporating it our data file. Did that come out of a particular interest in a certain aircraft type? Do you even have a favourite aircraft? Not really, but if pushed, then the Ju 88 and Me 410 recce versions.

They’re interesting choices. And lastly, what makes a good military aviation book, in your opinion? Detail. It has to have detail, footnotes, sources being identified, etc. The same applies to web sites, in my opinion.