III./ZG 1 Over Steppe and Sand 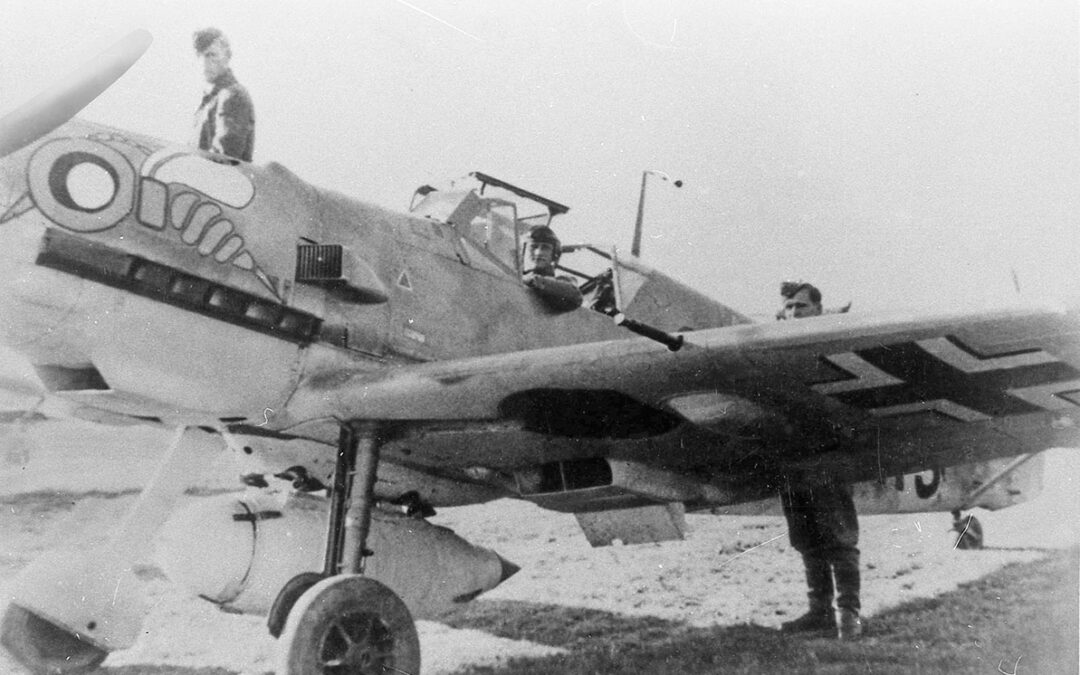 In early 1942 the Luftwaffe re-established the long-defunct Zerstörergeschwader 1, which had existed with a I. and a II. Gruppe in 1939 and 1940 before being disbanded. Two years later it was brought back to life with the Geschwaderstab, I./ZG 1 and II./ZG 1 formed from Eastern Front fast bomber unit Schnellkampfgeschwader 210. Also created was an entirely new Gruppe, initially known as III./SKG 210 but soon redesignated III./ZG 1. Rather than having the usual Zerstörer aircraft type on strength, the Messerschmitt Bf 110, the III. Gruppe of ZG 1 would instead receive the Messerschmitt Bf 109 to operate as a fighter-bomber. This Jabo unit would only exist for a few short months in mid-1942, but that time would be action-packed for the men who belonged to III./ZG 1.

To the Eastern Front

Initially, when first conceived in January 1942, the III. Gruppe of the new Zerstörergeschwader 1 was intended to receive the Me 210, but in March 1942 this was changed to the Bf 109 E-7/U1 (a fighter-bomber version of the famous Messerschmitt fighter equipped with a bomb rack and additional armour for the radiator). The unit was created at Lechfeld in Bavaria, a busy Luftwaffe airfield constructed before the war. The first III./ZG 1 Bf 109s were taken on strength in April 1942, all of which being repaired examples. Some new aircraft were then provided in May. Between 18 April and the end of the month pilots undertook various training flights, including bombing practise and formation flights, to develop and refine their skills. As was common during establishment periods for a new unit, several aircraft were damaged or written off in accidents, with one pilot killed and another injured. By 10 May III./ZG 1 was approaching full strength, reporting 24 serviceable machines, and ten days later it was assigned to Luftflotte 4, on the southern sector of the Eastern Front. The unit began its transfer east via Prague-Rusin and Kirovo, the eventual destination being Konstantinowka (modern Kostyantynivka in the eastern Ukraine). From there it could support the final stages of the German advance on Kharkov, which concluded successfully on 28 May.

Next, the Gruppe was sent north to Belgorod to support 6. Armee against the Soviet Southwest Front in Operation Wilhelm, a successful German attack which ran from 10 to 15 June 1942. The long summer days allowed for very early take-offs, with one III./ZG 1 airfield patrol on 10 June getting airborne at 02:30! Inevitably, there was a steady run of aircraft losses throughout June, given the hectic pace of operations. As such, by 10 June strength was down to fifteen serviceable aircraft out of 24, whilst at the end of the month there were only eleven Bf 109 E-7/U1s capable of flying missions. Thankfully, much-needed aircraft reinforcements arrived in mid-July. Meanwhile, the Gruppe was kept very busy supporting Operation Blau, the massive German offensive pushing into southern Russia towards the Caucasus and Stalingrad, which began on 28 June. With the Axis forces successfully advancing, around 18 July III./ZG 1 moved forward to Kuteinikovo, 40 kilometres south-east of Stalino (modern Donets’k, Ukraine). From there, missions were flown by III./ZG 1 to Rostov, but the Gruppe was about to be called away to a very different theatre of war.

On 31 July 1942 the unit was reported at Taganrog, to the immediate rear of the front, having given up all 28 of its Bf 109 Jabos to other units. III./ZG 1 was slated to leave the Eastern Front, and did so in early August. On the tenth of that month it was in the process of transferring to Erding near Munich, and it subsequently took on 30 Bf 109 E-7/U2s (similar to the Bf 109 E-7/U1, but with more armour), before transferring to North Africa via Italy. On 18 August the Luftwaffe at Naples reported that the unit would soon arrive in the desert, and Tobruk had to be stocked with parts for the Bf 109 E, which had long since been replaced by the Bf 109 F in the Mediterranean theatre. A few days later the unit left Schleißheim near Munich, and by the end of the month III./ZG 1 was operational in North Africa, flying ground-attack missions at the El Alamein front.

A big loss was suffered when the Kommandeur, Major Roland Borth, was shot down and badly wounded by Allied fighters in early September 1942. He was successfully retrieved from the desert by the 1. Wüstennotstaffel (see our eArticle about the unit here), only to succumb to his wounds on 9 September. He was replaced by the very experienced Major Siebelt Reents (see our blog post about him here), who had flown in Spain with the Legion Condor. Reents undertook his first mission on 12 September, from the unit’s base at Bir el Abd.

Meanwhile, more III./ZG 1 personnel were still in transit to the new theatre, with one officer and ten men on the way on 2 September. Over the next couple of days Bf 109 fighter-bombers in North Africa claimed a good deal of success against artillery, tanks and vehicles, while anti-shipping sorties were flown by III./ZG 1 on 14 September.

Conditions in North Africa were very challenging, and serviceability figures were generally poor. On 10 September the Gruppe had 24 aircraft on strength, of which eighteen were serviceable, and on 29 September it had 31 Bf 109s with only eleven serviceable.

Moves were afoot to amalgamate the various Bf 109 fighter-bomber units in the Mediterranean, of which there were now several. III./ZG 1 was to form the basis of a new, Africa-based Schlachtgruppe in mid-September 1942, to be designated as the I. Gruppe of Schlachtgeschwader 2. Meanwhile, a new III./ZG 1 was formed that month at Brünn from I./ZG 2 as a twin-engine Zerstörer unit. There is sometimes confusion about these two separate units, especially given that they existed within such a short space of time. However, the Bf 110 Zerstörer unit and the Bf 109 Jabo unit were two entirely separate entities, and it was only the Bf 109 Jabo-equipped III./ZG 1 that transferred to the desert. I./Sch.G. 2 would serve in North Africa until April 1943, and in October of that year became I./SG 10.

The Bf 109 fighter-bomber incarnation of III./ZG 1 existed only for a very short while, but it certainly packed a lot in to those five months. From the steppes of southern Russia and supporting major German offensives there, to the deserts of North Africa as the Axis and Allies duelled at El Alamein, the Jabo pilots of III./ZG 1 were kept very busy, operating with a great deal of success without ever suffering heavy personnel casualties in return.