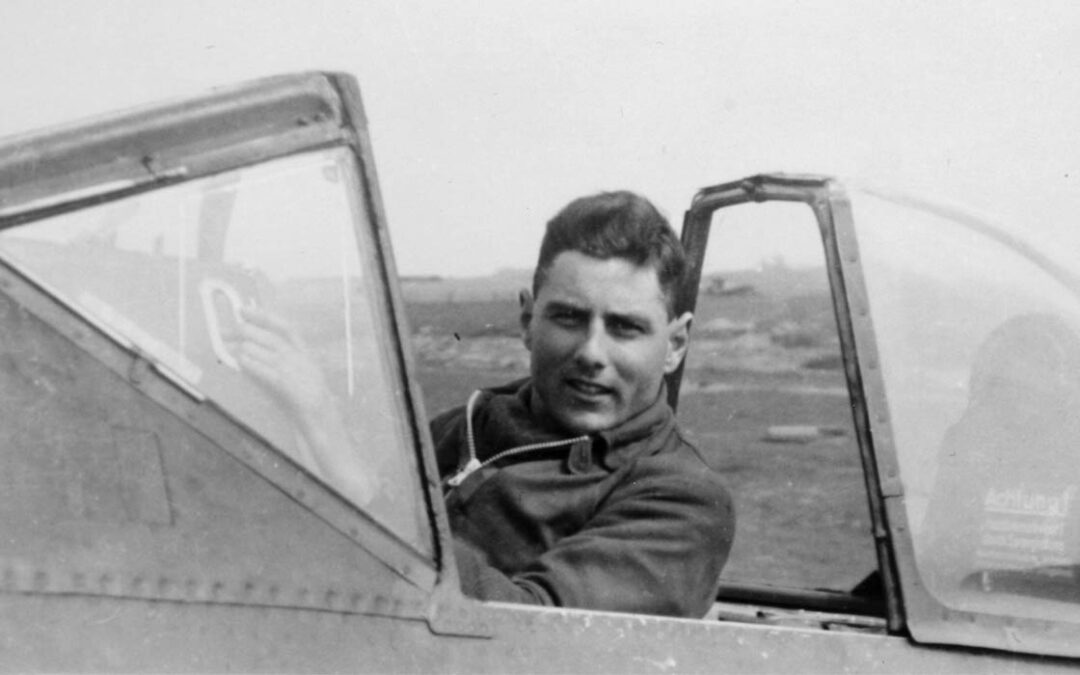 Our friend, former Luftwaffe pilot Helmut Wenk, passed away on 26 November 2020 in Lindau at the age of 97. He was a kind, generous man, and it was a real privilege to know him. Not only did Helmut share his own wartime stories with us, he also provided us with a great deal of support and encouragement over the years. Helmut helped us track down other veterans and their families, answered technical questions we had, and was a gracious host whenever we visited.

Herr Wenk did not start his life in Germany, but was the son of one of the many German immigrants to the United States. He was born in Saltaire, NY, on 3 July 1923. He returned to Germany and was enrolled in the Luftwaffe in 1941 and joined Flieger-Ausbildungs-Bataillon 63. After completing training as a Fw 190 fighter-bomber pilot in Cognac in France, Helmut flew operations over southern England with Schnellkampfgeschwader 10. The unit was then transferred south to Sicily and southern Italy, and he flew many missions against Allied ground forces and ships, before being wounded. He told us the story of one of the close calls he had during the war: “Once … I got hit in my fuel tank, I was flying in a valley after we had bombed, and saw a truck in front of a building, which I fired at and hit. But then I noticed a second truck equipped with anti-aircraft guns. I saw it much too late and flew very low above it, at about ten metres. I saw some of those flat English helmets. They shot at me and hit my tank. They probably believed that they shot me down, but I flew to Mount Etna, and then flew close to the lava in order to avoid being hit again. I did not know how long the engine was going to play along.” Helmut was fortunate on that occasion and could nurse his aircraft back to base.

Due to the injuries sustained in a crash some months later, he was not allowed to fly high-performance aircraft, so after recovering he was transferred to Nachtschlachtgruppe 4 on the Eastern Front. In the early months of 1944 Helmut flew at night over the Ukraine in the outdated Arado 66 and Gotha 145, while the front moved ever more westwards. For Helmut this felt like: “it was a degradation, but also a life insurance“. However, the nightly missions were not without dangers: “Nachtschlacht attacks were especially dangerous in snow showers, because radio guidance was weakened.“. On the another hand, on clear nights navigation was a simpler task, as he recalled: “Navigation during winter Nachtschlacht missions was easy. Everything was white, but roads, the sides of houses, foxholes, and railroads were black. Fighting was also very easy to see as well, including the HKL [Hauptkampflinie]”.

The pressure on the Luftwaffe in 1945 resulted in the lifting of his ban on flying the Fw 190, and he joined Schlachtgeschwader 1 stationed north of Berlin in April 1945. Here, he witnessed first-hand from the air, the final days of the war in the Berlin area.

Helmut was the first veteran who both Andrew and Morten met. We reached out to him in May 2004 via our friend and fellow researcher, Harold Thiele, in connection with our book project covering the operations and pilots of the Fw 190-equipped units in Sicily and southern Italy. He was very keen to help and it would be the beginning of a long friendship which both Andrew and Morten will never forget. The friendship resulted in more than half-a-dozen visits and 50 letters over the years.

After the war Helmut studied to become an architect, and once that was completed, he settled down by the Bodensee, in the town of Lindau. He worked for many years as a city architect with a focus on restoring the old and historical buildings in the town. He married Anne, who was a lifelong companion and together they had two children. Rest in peace, Herr Wenk.