Today a new section is opening on airwarpublications.com … the ‘Research Section’. The material in this area is available for all, but is focused on helping researchers of the European air war during the Second World War. The files are freely available for download here: The Research Section

These lists are the result of many years of painstaking work. However, Nigel considers them as starting points for further discussion, and not the final word on the subject. Thus he welcomes feedback, comments and additions. Contact information for Nigel can be found here: German Aircraft Production 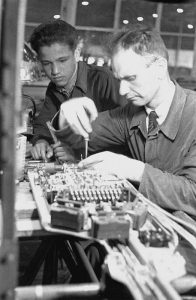 Assembly of electrical panels for the early variants of the Focke-Wulf 190 A at the factory in Bremen.

More of these lists will appear on the Air War Publications website in the future, featuring all categories; fighters; bombers; ground-attack; reconnaissance; trainers and utility aircraft.
The release plan for the types will be updated here: Release Plan

Another part of the Research Section features short texts outlining the histories of four small Luftwaffe units. These brief unit histories are the result of a collaboration between Larry deZeng and Andrew Arthy. Whenever photographic material is available it will be included. There are a dozen more unit histories in the pipeline, and they will be released as they are completed.

Also coming up are various files and lists covering operational aspects of the European air war, including a work-in-progress list of Luftwaffe claims for damaged and sunk Allied ships.