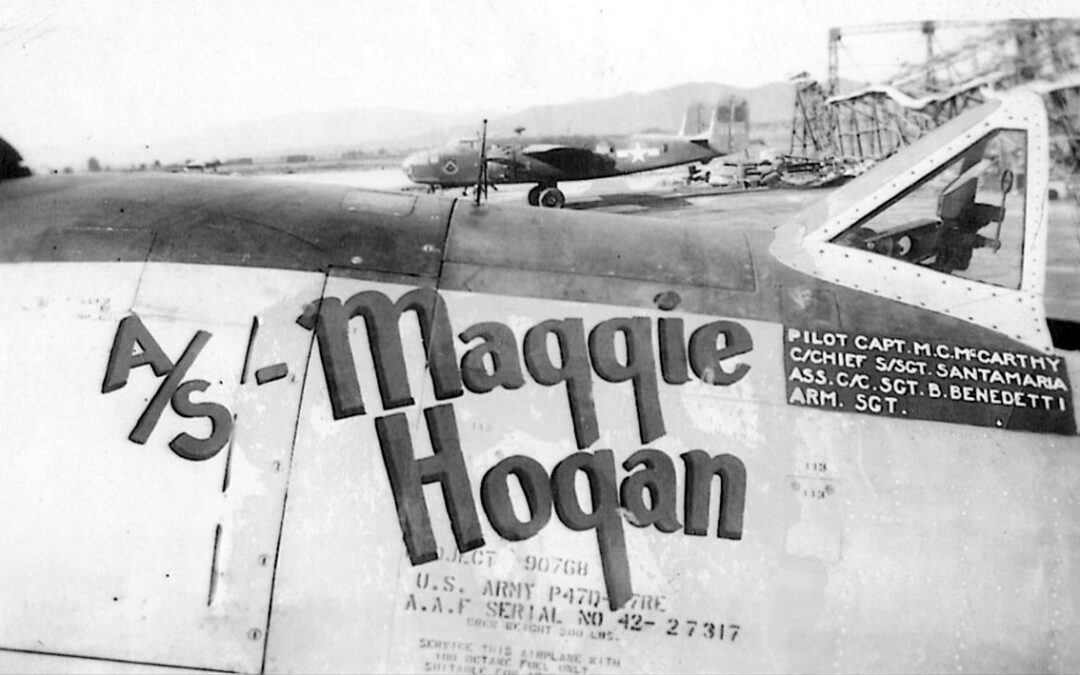 14 April 1944 was one of the quieter days in the Mediterranean air war in terms of aerial combats, with both sides making only a handful of victory claims. In fact, the Luftwaffe undertook only 64 sorties throughout the entire day. For the Western Allies, the focus of the day’s attacks was rail targets to the north of Rome, with USAAF fighter-bombers and medium bombers dispatched there. The 57th Fighter Group sent out 91 sorties with its P-47 Thunderbolts, and it was one of the morning missions which is the subject of this blog post.

At 08:45 sixteen P-47s from the 64th Fighter Squadron/57th Fighter Group took off from their base at Alto, near the village of Fovelli on the east coast of Corsica. Twelve of the aircraft were weighed down by a pair of 500 lb general purpose bombs, while four pilots served as top cover, led by the Boston-born and raised 1/Lt. Michael C. McCarthy. Initially, the mission went entirely as planned. A target was located almost an hour after take-off, a railway bridge near Perelli, to the south-east of Florence, and bombs were dropped. They then headed south towards Rome, and one of the participating pilots wrote: “After dive-bombing over target we reformed the flight and flew south to Lake Bolsena. Our altitude was 7,500 feet. Over Lake Bolsena we engaged 32 plus enemy aircraft, all of which were at an altitude of approximately 14,000 feet.“

Flying top cover, Michael C. McCarthy spotted the enemy, and in his memoirs recorded his role in the combat:

“… I could tell they were ready to play hardball.

Chad Reade, my wingman on this mission, was in the latest group of new guys to join the squadron. … Chad reported one Me 109 diving on the last P-47s … I picked up the Me 109, rolled inverted, pulled in trail, and closed easily to shooting range while Chad covered me. I held my breath with the pipper steady on the fuselage and fired a long burst. The cone of bullets from my eight guns hit the cockpit and engine. The airplane disintegrated, bursting into several flaming pieces. In a steep vertical dive, I watched the smoking wreckage falling into Lake Bolsena north-west of Rome. With Chad in trail, we converted that dive into a vertical climb back to what had become quite a turning fight. With that extra speed, I caught sight of a single Fw 190 crossing above me. I fired a burst, a low percentage high-angle shot that probably missed. The Germans chose not to stay with sixteen P-47s.“

Although the Germans hastily left the combat, they had inflicted some damage before doing so. The 57th Fighter Group’s opponent on this occasion was the II. Gruppe of Jagdgeschwader 77, which reported engaging the Americans in the area of Viterbo, south-south-east of Lake Bolsena. The Gruppe claimed a solitary success: Feldwebel Erhart Menge reported the destruction of a P-47 at Montalto di Castro, the second aerial victory of his career.

There was, in fact, one American loss in this combat, 2/Lt. Neal H. Gundersen in his P-47D. He had been flying as Captain Carll’s wingman, but he had some serious problems during the mission: his radio was malfunctioning from the start, and one of his 500 lb bombs was hung up after the bombing run. During the combat near Lake Bolsena he lost his formation and then ditched in the Tyrrhenian Sea, subsequently being taken prisoner. His aircraft was discovered in the sea many years later by an Italian dive team.

On the German side, II./JG 77 reported two Bf 109 G-6s shot down, with one pilot bailing out wounded, and another killed in action. Thus ended a brief but deadly skirmish typical of the Italian campaign in 1943/1944.