From February 2008 to June 2011 Morten was fortunate to interview a few Hs 123 pilots on a number of occasions and gain a good insight into their wartime careers as well as how they experienced flying the Hs 123 under various conditions. Most notably Morten interviewed Ritterkreuzträger Erich Axthammer several times as well as his former unit leader Staffelkapitän Leutnant Konrad Pingel.
At the moment Morten is working on the Hs 123 pilot interviews, getting them transcribed in order to make use of the interesting stories for the up-coming eArticle as well as the book project, which is slowly, but steadily taking shape. Below is a short excerpt from one of the interviews with Konrad Pingel, describing the first of two crashes Pingel experienced in the Hs 123: “One time I attacked artillery. They had machine guns around them, which I did not see and I attacked the artillery from the rear. The machine guns fired at me and cut down my engine, but I could glide over the frontline. Some hundred metres behind our frontline I spotted a [army corps] telephone wire hanging in the air while losing altitude. I tried to pull up, but my tail wheel got caught in the wire and I went down.”

Next in line are the interviews with Erich Axthammer who Morten met in the same period, and who happened to serve under Leutnant Pingel when they were both assigned to 7. Staffel of Schlachtgeschwader 1 in 1943.

New Hs 123 material keeps appearing, but in case you have anything to contribute (photos, documents, pilot accounts) we look forward to hearing from you. Your contribution will be much appreciated. Please contact us via our contact form. 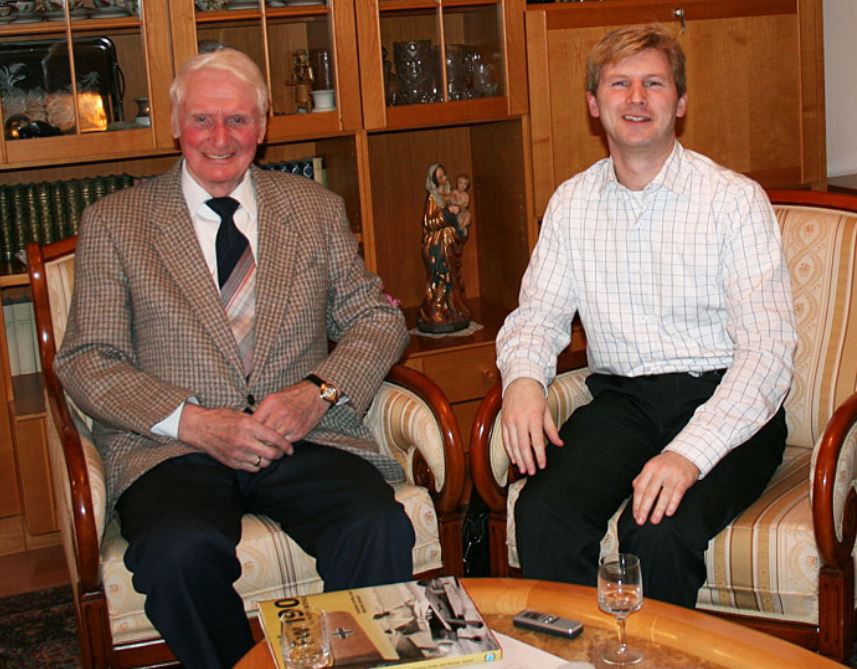 Above: Konrad Pingel and Morten Jessen photographed at Mr Pingel’s house south of Ulm in southern Germany on 28 February 2008 during their first meeting. During the following four years Konrad and Morten would keep in close contact and meet six times.