The Accuracy of ULTRA

In the past there have been some questions asked and discussions had about the accuracy of ‘ULTRA’, a term used for wartime German signals intercepted and decrypted by the British and their Allied partners. In particular, questions have been asked about the standard of translation by the Allied personnel involved. In this blog we have chosen a few examples of original German signals, and then searched for the British equivalents, so that people can see the accuracy of some of the translations for themselves.

The original German version of the daily report on Hs 129 operations in Tunisia.

Example 1
While doing some research into Henschel 129 operations in North Africa for a possible future eArticle, Andrew realised he had two copies of the same report, one the German original, and the other the British translation found in an ULTRA file in the British National Archives series HW 5. The German original, seen to the right, was sent by Luftflottenkommando 2 (the Luftwaffe headquarters in the Mediterranean) to higher headquarters reporting on the day’s Hs 129 operations over Tunisia. Below right is the same signal, but this is the version intercepted by the British and translated into English. As can be seen, the translation is very accurate.

British translation of the German original, as found in the HW 5 series at the British National Archives, Kew.

The signal refers to some of the final Henschel 129 operations in North Africa, in late-April 1943. By this stage, the Axis bridgehead was compressed around Bizerta and the Tunisian capital, Tunis, and Luftwaffe army support operations were met with heavy resistance from Allied fighters and anti-aircraft gunners. Still, the Hs 129 was a vital weapon against Allied tank breakthroughs, so they were sent out despite the great odds against them. As can be seen in this report, the mission had to be broken off due to the very strong anti-aircraft fire encountered. The Henschel referred to as shot up and force-landed was Werknummer 0351, and it was reported as a total loss. Hs 129 operations would sporadically continue in Tunisia into May 1943.

Example 2
Another example comes from a little earlier in the Tunisian campaign. On 14 February 1943 the Axis army began a strong counteroffensive in central Tunisia, attacking the inexperienced American forces holding a thin defensive line to the south-west of Kairouan. Here we present part of the daily Luftwaffe operations report, with the German original above and the version intercepted and translated by the British below. The only major difference between the two versions was the different times used. The British converted German time to their own time. One interesting fact about ULTRA – in the versions passed to Churchill, he insisted that all 24-hour time references be replaced by 12-hour time references, because he strongly disliked the former style! So when you view Churchill’s personal ULTRA signals, in the HW 1 series at the British National Archives, you will see all 24-hour time references crossed out and replaced (see the bottom of this post for an example).

British translation of the Ju 87 mission report from 14 February 1943.

Returning to the contents of the signal, the Ju 87s involved in this mission were from III./St.G. 3, operating under the Fliegerführer 3 and based at Mezzouna. They were escorted by a dozen Bf 109s, but no enemy fighters were sighted on this occasion. The force-landed Ju 87 mentioned in the report was piloted by a future Ritterkreuz winner, who was able to return to his unit early the next morning after quite an adventure.

Example 3
To finish this short series of comparisons, here is a report on Luftwaffe operations from the late-war period, namely April 1945. The original (to the right) was a report from the German naval command, outlining Luftwaffe operations for the day and night. It is interesting to note that the British failed to intercept a word in the first line of the report, and simply wrote “(smudge) units“, but the German original confirms that it should be “Marauder units“. Otherwise, the British translation is very close to the German original. The abbreviation G/A in the British translation stands for ground-attack, and M/T stands for motor transport. 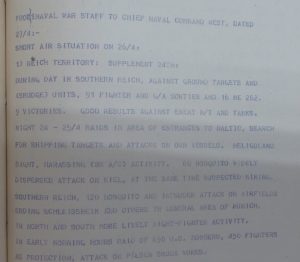 The British translation of the German original. One word is missing, and this is noted as “(Smudge)” by the translator.

As can be seen, the Luftwaffe was still operational at this late stage of the war, and Andrew is currently working on an article about the air activities of this very day, 24 April 1945, and the ensuing night of 24/25 April. This article will be in three parts, and we hope that it will be available in 2019. It has not been an easy subject to research due to the paucity of sources, but ULTRA material has really helped fill the gaps in surviving German documentation.

For more information about ULTRA, a visit to this page on Nick Beale’s website is highly recommended. He is one of the few authors to make thorough use of this valuable source.

Conclusion
ULTRA does not provide an answer to everything, and one should of course be conscious of the nature of the decrypts. For example, even though detailed Luftwaffe intentions might be outlined in a signal, it does not mean that the planned operations were actually carried out. Also, it is a very patchy source, with very few decrypts available from certain battlefronts for lengthy periods. For example, there is almost no coverage of the Western Front between 1941 and May 1944. If you are interested in the Mediterranean and African theatres of war, or the southern sector of the Eastern Front, ULTRA is a real goldmine, but even for those areas there are gaps in the coverage. 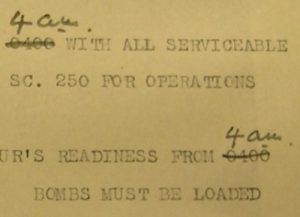 Here are two examples of 24-hour time being changed to keep the British Prime Minister happy!

That said, ULTRA provides many pieces of the puzzle in areas where German documents have been destroyed or otherwise do not exist. However small the pieces provided by this source, they are still better than speculating or using questionable secondary sources. We have used ULTRA throughout the past eighteen years as one of our main sources for detailed information about the Luftwaffe. One thing that is hard to ignore is the continuity, which is not possible to get from many German primary sources. Although ULTRA signals often only provide small bits of information, they can be really valuable when there is nothing else, and they can very often be used to tell interesting and valuable historical stories.