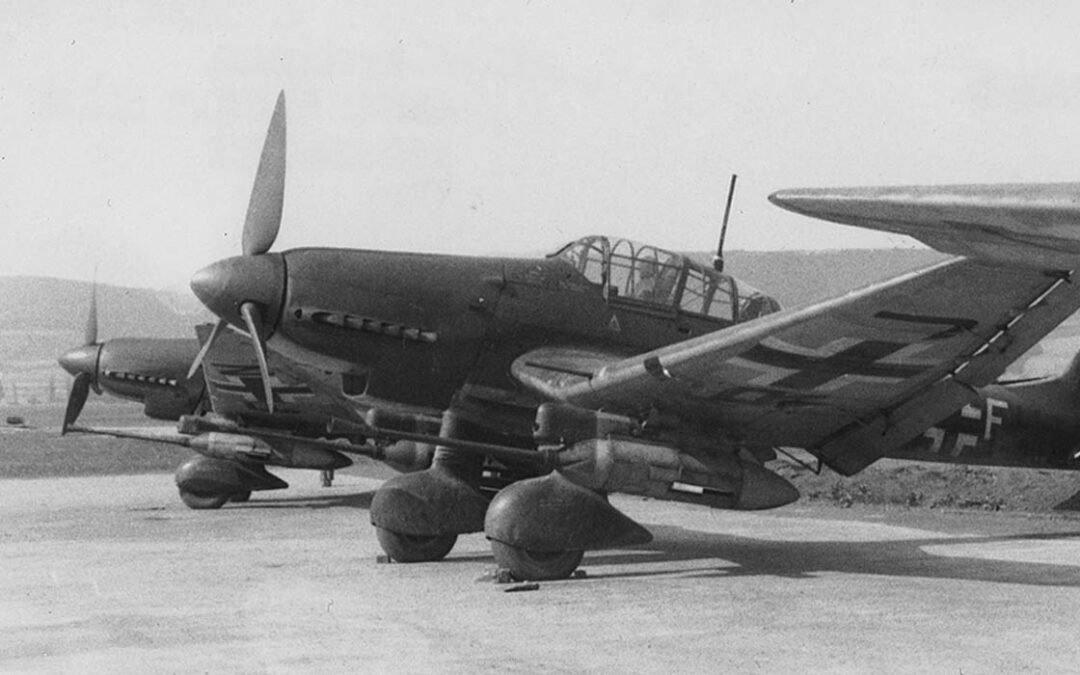 Introduction
When operations by the Ju 87 G tank-buster aircraft are discussed, Hans-Ulrich Rudel understandably receives most of the attention. However, he was not the only successful pilot flying the potent anti-tank aircraft, and this blog post looks at some Ju 87 anti-tank operations in mid-April 1945.

The Ju 87 Units
In the final month of the war there were only a handful of Staffeln equipped with the Ju 87 G, all of which were committed to operations against the Soviet Union, as the aerial situation on the Western Front meant the tank-busters could not operate safely there even with a heavy fighter escort, which was rarely possible anyway.

On the central sector of the Eastern Front was 10.(Pz.)/SG 77, based at Kamenz to the north-east of Dresden. Operating further south, under Luftflotte 4, was 10.(Pz.)/SG 2. Each of these units had a dozen or so Ju 87s Gs on strength, and a similar number of crews, and will be the focus of this blog post. 10.(Pz.)/SG 2 was led by Leutnant Anton Korol. Born on 8 October 1916, Korol took command of the Staffel on 1 September 1944, and had recently been awarded the Ritterkreuz. Meanwhile, Oberleutnant Max Diepold commanded 10.(Pz.)/SG 77, and both men were veterans of the Eastern Front air war. Hans-Ulrich Rudel also had some Ju 87 Gs on strength with his Geschwaderstab of SG 2, alongside various Fw 190s. This meant he could choose his aircraft type depending on what the mission required.

Soviet Offensive
The Red Army’s 1. Belorussian and 1. Ukrainian Fronts began their Berlin offensive before dawn on 16 April 1945. The handful of Ju 87 Gs could not hope to achieve much against the massed Soviet armour involved in the operation, but the Luftwaffe airmen would do their utmost in coming weeks to support the German infantrymen. If nothing else, Soviet armoured targets were plentiful for their Bordkanone 3,7 – the deadly 37mm cannon mounted under each wing of their Stukas.

10.(Pz.)/SG 77 was based in the sector of Heeresgruppe Mitte, to the south-east of Berlin and facing the 1. Ukrainian Front, which broke into the German defences as much as ten kilometres on the opening day of the offensive. However, in the face of the Soviet onslaught, only four Ju 87 G sorties were flown by 10.(Pz.)/SG 77, to Forst near Cottbus.

As a result of the precarious situation, 10.(Pz.)/SG 2 was ordered from the area of Luftflotte 4 to VIII. Fliegerkorps on 16 April. After a brief stopover at Prossnitz-Kosteletz (modern Prostějov, Czech Republic), flying sorties to the Brno area on 18 April, the Staffel moved to Niemes-Süd (also called Kummer, near modern Mimoň, Czech Republic) on the morning of 19 April. This would be its home until the end of the war, and 10.(Pz.)/SG 2 would serve as part of Gefechtsverband Rudel, a formation led by its namesake, with various subordinated ground-attack and fighter units.

On 18 April, 10.(Pz.)/SG 77 reported fourteen Ju 87 Gs on strength, half of which were serviceable, and the Staffel was able to undertake 26 sorties to the critical areas of Bautzen and Cottbus during the day. Two Ju 87s of Rudel’s Stab SG 2 also operated on the eighteenth, although the Kommodore received an official order from Hitler that day to cease operational flying because he did not want the Reich to lose perhaps its most famous hero.

Both Ju 87 G Staffeln were dispatched to the area east of Bautzen on 19 April 1945, where Soviet spearheads were approaching the city (they would capture it the next day). One aircraft from 10.(Pz.)/SG 2 was lost during these operations. That date also saw 10.(Pz.)/SG 77 transfer to Görlitz, to the east of Bautzen.

German Counteroffensive at Bautzen
On the morning of 21 April 1945 Heeresgruppe Mitte successfully counterattacked towards Bautzen, cutting off a Soviet division and eventually recapturing the city. As a result of this fighting, the Ju 87 G crews would focus their attention in this sector over the next few days.

On the opening day of the German counteroffensive, VIII. Fliegerkorps reported just four anti-tank sorties. Both 10.(Pz.)/SG 2 and 10.(Pz.)/SG 77 were in action on the 22nd, as a total of 32 Ju 87 G sorties were flown. However, each Staffel suffered a casualty during the course of the day. The Soviet 1680. Anti-Aircraft Regiment reported shooting down a Ju 87 east of Bautzen, so it was probably responsible for one of the losses.

Gefechtsverband Rudel did what it could on 23 April 1945, with Fw 190s of the Stab of SG 2 carrying out reconnaissance and providing escort for four sorties by anti-tank aircraft. 10.(Pz.)/SG 2 flew four sorties, and 10.(Pz.)/SG 77 eight, to the areas of Weißenberg, Bautzen, and Dresden. Lt. Korol was responsible for one of the sorties, a tank hunt to the area south-east of Bautzen. However, unit strengths were falling – 10.(Pz.)/SG 77’s dropped from a total of fourteen aircraft on 18 April to just nine on 23 April.

Conclusion
The anti-tank Staffeln of SG 2 and SG 77 would continue to operate successfully until war’s end, and on 8 May 1945, the final day of the Second World War, pilots would fly their Ju 87 Gs to American-held airfields. The Air War Publications team has a great interest in the Ju 87 G, so expect us to publish more information about this subject in the next few years.