Summer is upon us (at least if you live in the northern hemisphere), which means holidays and time out of the office. However, that is not entirely the case at Air War Publications. We are working to bring you some more stories from World War II, and some of them are close to being released. As always, it is the last bits and pieces that take time to get into place, but we are getting there.

In the coming months we will be releasing the following eArticles and hope you will find them interesting. In line with our usual style there will be exciting and untold stories, accounts from the men who were there, previously unpublished photos, maps and superb profiles.

Research Area
Air War Publications is fortunate to be able to soon release detailed German aircraft production information sheets, collected and organized by Nigel Moore. He will start out with some of the early types such as the He 72, Fw 56, Ar 76, He 51, Ar 64, and work his way towards the more known types such as the Ju 87, He 111, Do 17 and early Bf 109 variants. 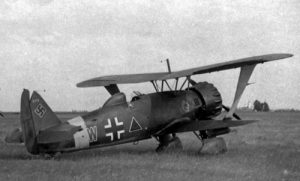 Henschel Hs 123: Almost all the sources have been collected and structured in folders, ring binders, photo albums etc. For those new to this little aircraft, Morten will write a two-part article within the next few months, which will include some of the material uncovered during the past 6-7 years of research. There will be new photos, interview material and a good overview of the development and production published in the first part. Once the articles have been published the book writing will be started.

Air War Courland: Although there has not been too much progress lately, Andrew hopes to take some significant steps forward with his Courland research in coming months. Once the research is finalized, the writing can finally begin!