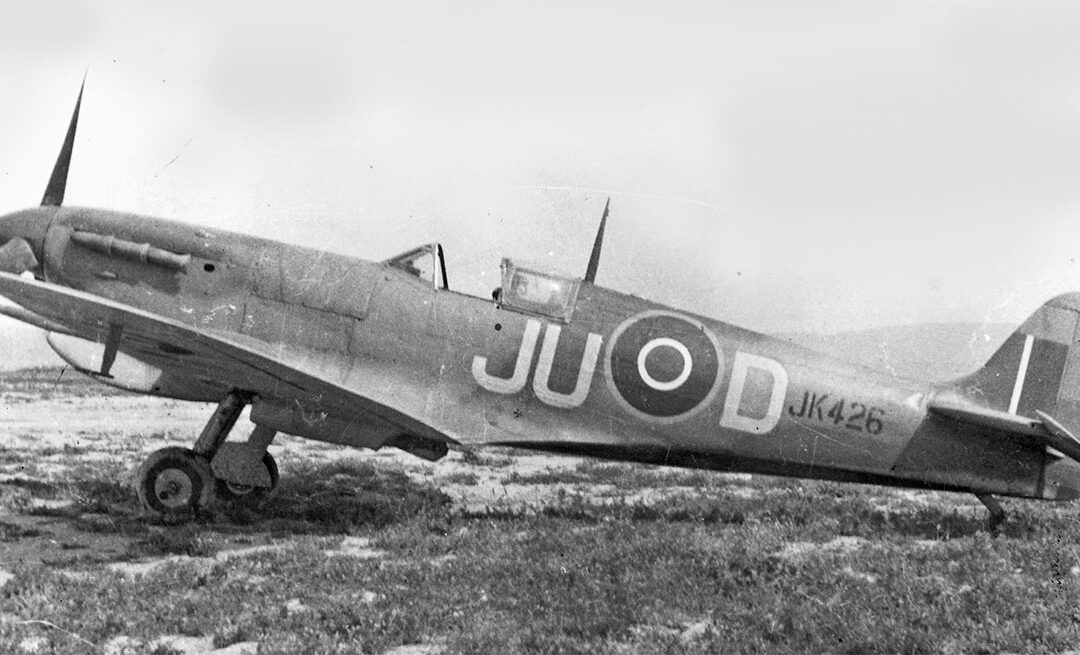 25 April is a national day of remembrance for Australians and New Zealanders and is known as ANZAC Day. The day commemorates the sacrifices and service of the men and women of their armed forces and marks the anniversary of the Gallipoli landings by the Australian and New Zealand Army Corps (ANZAC) soldiers in 1915. ANZAC Day has been honoured every year since then, and is an important date on the calendar in both countries. It was recognised throughout the Second World War, and this post looks at the operational activities of some of the Australian and New Zealand pilots fighting in the spirit of the ANZACs on one of those days.

During the Second World War, many Australians and New Zealanders served with the Royal Air Force at locations far from home, and two fighter units that had quite a few ‘Aussies’ and ‘Kiwis’ on their strengths were No. 81 Squadron and No. 111 Squadron (or Treble One as it was commonly known).

ANZAC Day of 1943 found the units based in northern Tunisia, flying Spitfires from the sprawling forward airfield at Souk el Khemis. Not only was 25 April 1943 ANZAC Day, it was also Easter Sunday, so it had special significance for all squadron members, and not just for those from ‘Down Under’. During the day No. 81 Squadron flew four missions, meeting the enemy on two occasions, while No. 111 Squadron flew three missions, and Australians and New Zealanders would feature on most of those operations.

The first No. 111 Squadron operation of the day was airborne at 06:25, and in command was Australian F/Lt. Barry E. Gale (see our eArticle about him here). They were tasked with a sweep and patrol of the frontline, alongside Nos. 72 and 154 Squadrons, to support the British First Army offensive aimed at final defeat of the Axis forces in North Africa. Also involved was Auckland-born Dennis ‘Digger’ Hogan, who had already claimed two enemy aircraft destroyed and two damaged in Tunisia. However, Barry Gale noted in his logbook: “Very quiet“, with no Germans or Italians sighted.

No. 81 Squadron also began the day with an early battlefield sweep, by five Spitfires, including one piloted by New Zealander Bryan Young. They flew at 14,000 feet but saw no enemy aircraft.

At 09:10 a second No. 111 Squadron patrol left Souk el Khemis to return to the area of Medjez el Bab and Pont du Fahs, with South African S/Ldr. ‘Chris’ Le Roux taking over command this time. Barry Gale was along again, as was Dennis Hogan. This time enemy aircraft were reported in the vicinity, but the Spitfire pilots were unable to make contact, much to their frustration.

Six Spitfires of No. 81 Squadron took off for a sweep at 11:05, including future New Zealand ace F/Sgt. Alan Peart. He later wrote: “ANZAC Day, 25th April 1943, turned out to be a day to remember.” They flew to the Medjez el Bab area and had a scrap with four Bf 109s, which promptly shot down F/Sgt. Peart’s wingman: “I felt very bad about that as a leader is supposed to look after his number two.” However, he was able to gain some revenge against one of the attackers: “I fired from about 50 yards and hit him on the fuselage. He rolled over and spiralled and as he went spinning to the ground I saw the pilot bail out.”

At midday orders came through to Treble One that it would be involved in a long-range mission in the afternoon, so a dozen of the Spitfires were equipped with drop tanks. The unit took off at 16:40 to provide high cover for a shipping strike by American B-25s in the Gulf of Tunis, and this final Treble One mission also saw some ANZAC involvement. New Zealander Sgt. Johnny Church was the sole representative on this occasion, on what was another uneventful sortie for No. 111 Squadron, although the other RAF fighter unit involved in the escort, No. 154 Squadron, was able to claim a Bf 109 destroyed and two damaged. Meanwhile, the B-25s from the 321st BG had no joy, despite dropping 144 hundred pound bombs on an Axis convoy of Siebel ferries and escort vessels.

Bryan Young was involved in the final No. 81 Squadron mission of the day, a sweep to the Tunis area where German fighters were met and engaged, with two of them damaged.

One ‘Kiwi’ from No. 111 Squadron who was not involved in the ANZAC Day operations was twenty-year old Tony Fowler, who had been shot down a few days earlier, and on 25 April was lying in the bed of a German-held hospital near Tunis, with a large gash in his head. He would later return to his unit when North Africa was liberated, much to the joy of his friends ‘Digger’ Hogan and Barry Gale.

Thus ended ANZAC Day for the Australians and New Zealanders of Nos. 81 and 111 Squadrons, and Easter Sunday for the others in the units. They had not claimed much success, but they had all made it through their missions unscathed. Even though 28 years had elapsed since the ANZACs had first stormed ashore on the Turkish peninsula, the men of Nos. 81 and 111 Squadrons were keenly aware of the military heritage, and flew and fought with the spirit of the ANZAC tradition as the Allies steadily moved towards final victory in North Africa.