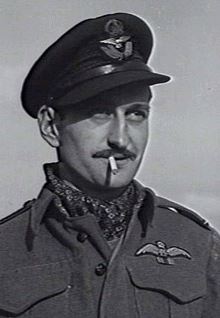 Yesterday we met with 94-year old Murray Adams, a former RAF pilot who flew with 250 and 80 Squadrons and had a very interesting wartime career. The meeting took place in Brisbane at the United Service Club on Wickham Terrace, which required a certain amount of formality – they have a dress code and it is not thongs, shorts and t-shirts! Discovering this fact only twelve hours before our meeting meant we had a high priority task on our hands, but with excellent assistance from our hosts on Bribie Island we obtained formal clothing. We were ready (although Morten’s shoes were three sizes too big and the trousers more than a little too wide around the waist) and looked stunningly good. 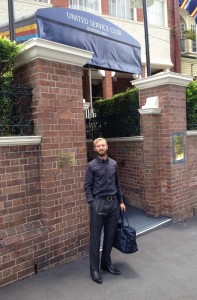 We talked with Mr Adams for four hours and recorded more than two-and-a-half hours of interview material. Despite his age Mr Adams is a well spoken gentleman with a very clear mind. He was rushed into frontline service with less than ten hours flying time in the type he first flew in combat with 250 Squadron in October 1941 – the Tomahawk.
Contrary to many Mr Adams liked life in the desert, but disliked the underpowered Tomahawk which was no match for the Bf 109s he encountered over the desert. He was shot down on 1 December 1941 but returned to his unit and continued to fly in the Mediterranean, transferring to 80 Squadron in July 1943. By that time he had also flown Gladiators, Hurricanes, Fairey Fulmars and Kittyhawks. He requested the transfer because he wanted to fly Spitfires. With 80 Squadron he flew operations from central Italy, and ended up in England flying Spitfire Mk. IXs for a while before the unit converted to the Tempest in August 1944. He liked the Tempest almost as much as the Spitfire – not for its elegance, but for its power, speed and armament. It is not unlikely that an eArticle will appear in the future about Murray Adam’s adventures over North Africa, Italy and north-western Europe.