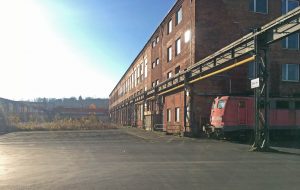 A view of the Henschel factory site in Kassel.

Several things came together last Friday during Morten’s visit to his long-time friend Frank in Frankfurt, making it possible for him to visit the Henschel-Museum + Sammlung in Kassel. Morten was joining Frank for the arms fair in Kassel, and a few days prior he succeeded in arranging a visit to the former Henschel factory site there, housing the company museum and archive. Normally closed on Fridays, the Museum and Sammlung archivist Gerd Möller was kind enough to agree to change his schedule in order to meet Morten.

Although Henschel is best known for manufacturing locomotives, the company produced aircraft (and trucks) for a short period of time in the mid-1930s to 1945. Having corresponded with Herr Möller over the past twelve months in connection with his Hs 123 research, Morten knew there were bits and pieces yet to be “dug out” of the archive, in addition to seeing the museum, but he also knew that a personal visit would be the best way to access the material.

Morten was dropped off at Wolfhager Strasse in Kassel, and walked past the empty guard house and through the open gate. Signs led the way through the industrial complex to a small building in a remote corner of the site. Once an area buzzing with activity, it was now empty and almost deserted. 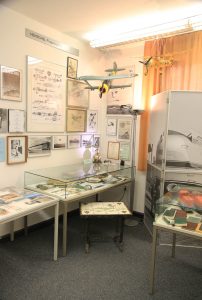 The corner of the museum, dedicated to the aircraft designs made by Henschel Flugzeug-Werken A.G.

After a cup of coffee, Herr Möller gave a tour of the house, with the archive and the museum, before the focus turned to research. The museum is located on the second floor and tells the story of the Henschel family and development of the company since it was founded in 1810.

Despite the relatively small size of the museum and archive, it holds an impress amount of information – among other things there are 500.000+ hand-drawn technical plans of locomotives (and a few of aircraft), many film rolls and company publications.

Since the company’s aircraft production was very limited, only a corner in one of the small rooms has been devoted to this story. The rest of the museum focuses on the production of locomotives, trucks and heavy steel machinery, displaying some of the smaller artefacts relating to the production.

It was an interesting tour and some useful facts were picked up for the Hs 123 project. Afterwards, Gerd and Morten started to browse through a few boxes with various mostly interesting documents, notebooks and publications from the 1930s and 1940s. A few things were added about the Hs 123, but items regarding the Hs 129 Panzerjäger were also found.

In case you are interested in visiting or reading more about the museum and archive, you can find more information here at the museum web site. 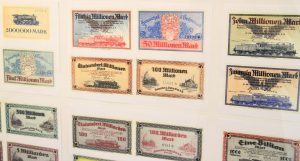 Maybe just one of these notes, displayed in the museum, could have been enough to buy the Bruck Nachlass.

After three hours at the Henschel-Museum + Sammlung, Gerd gave Morten a lift to the arms fair, where the afternoon was spent viewing the many historical weapons and collectables (some genuine, some fake). One very interesting item was the Nachlass (estate) of Schlachtgeschwader 77 Kommodore Helmut Bruck (without Ritterkreuz and photos), but unfortunately that was a little beyond Morten’s budget, selling for 25.000 euros!

It was yet another interesting and rewarding experience for the Air War Publications team.